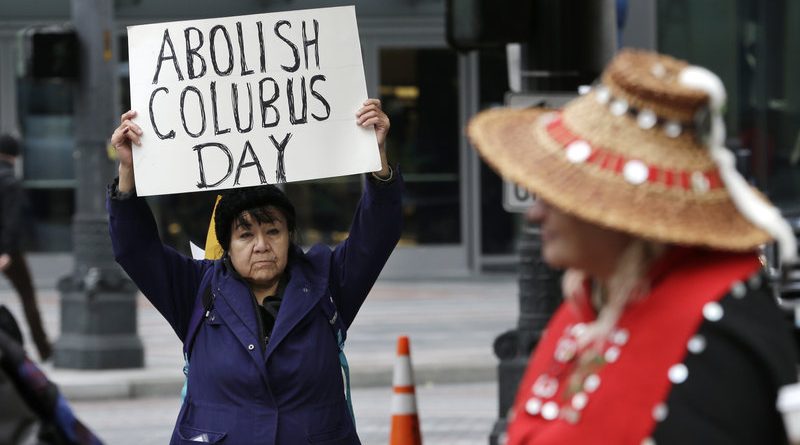 For years, only one state — South Dakota — officially designated the second Monday in October to honor the people and cultures that thrived in North America before Europeans’ arrival.

The state of Vermont and the city of Phoenix have joined the list of places that now call the second Monday in October Indigenous Peoples’ Day, in a show of momentum for honoring indigenous people on the federal holiday that’s named for Christopher Columbus.

Phoenix is now the largest U.S. city to recognize Indigenous Peoples’ Day, according tomember station KJZZ, which says the move came on a unanimous vote. Other cities have adopted similar laws in recent years, including Seattle and Minneapolis.

The city council of Denver, which observed Indigenous Peoples’ Day last year under a temporary proclamation, embraced a permanent observance this week — a development that’s particularly striking because Denver is where the idea for a holiday honoring Christopher Columbus first took root.

“Colorado became the first state to observe Columbus Day as an official holiday,” according to The Denver Post, “and in 1909, Denver held its first Columbus Day parade.”

But the push to rename the Columbus holiday is being turned back in some areas: This week, the Cincinnati City Council rejected an Indigenous Peoples’ Day proclamation, for instance.

For years, only one state — South Dakota — officially designated the second Monday in October to honor the people and cultures that thrived in North America before Europeans’ arrival.

As of this week, Vermont also recognizes the second Monday of October as Indigenous People’s Day, after Gov. Peter Shumlin issued an executive proclamation. In it, Shumlin noted that Vermont was founded on land that was long inhabited by the Abenaki people.

South Dakota adopted Native American Day back in the 1990s; California observes a day by the same name, but it does so on the fourth Friday in September. Late last month, Nevada’s governor established American Indian Day in the state; it was observed on Sept. 23.

As for the reasons behind the push for change, here’s what Lakota activist Bill Means told Minnesota Public Radio back in 2014, when Minneapolis adopted Indigenous Peoples’ Day:

“We discovered Columbus, lost on our shores, sick, destitute, and wrapped in rags. We nourished him to health, and the rest is history,” Means told MPR. “He represents the mascot of American colonialism in the Western Hemisphere. And so it is time that we change a myth of history.”