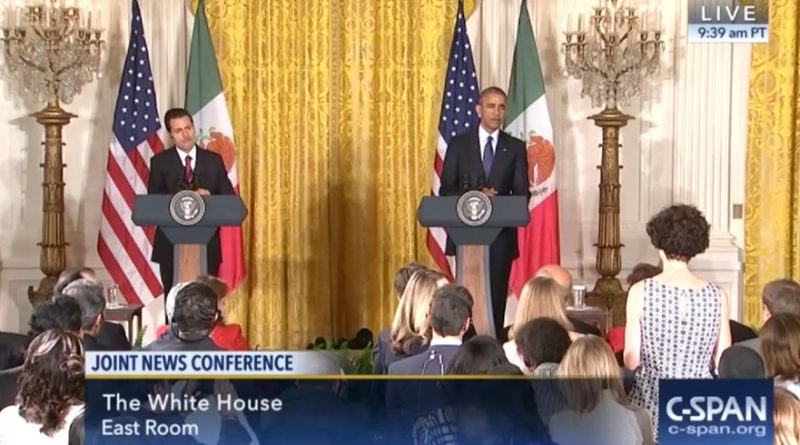 On Sept. 9, the Obama administration revoked authorization for construction of the Dakota Access Pipeline (DAPL) on federally controlled lands and asked the pipeline’s owners, led by Energy Transfer Partners, to voluntarily halt construction on adjacent areas at the center of protests by Native Americans and supporters.

However, at the same time the pipeline and protests surrounding it were galvanizing an international swell of solidarity with the Standing Rock Sioux Tribe and its Sacred Stone Camp, another federal move on two key pipelines has flown under the radar.

In May, the federal government quietly approved permits for two Texas pipelines—the Trans-Pecos and Comanche Trail—also owned by Energy Transfer Partners. This action and related moves will ensure that U.S. fracked gas will be flooding the energy grid in Mexico.

The Dakota Access Pipeline is also set to carry oil obtained via hydraulic fracturing (“fracking“), but in the northern U.S., from North Dakota’s Bakken Shale Formation through several Great Plains states to Illinois.

Within a two-week span in May 2016, as the Sacred Stone Camp was getting off the ground as the center of protests, the U.S. Federal Energy Regulatory Commission (FERC) issued presidential permits for the Trans-Pecos and Comanche Trail pipelines. Together, the pipelines will take natural gas obtained from fracking in Texas’ Permian Basin and ship it in different directions across the U.S.-Mexico border, with both starting at the Waha Oil Field.

Similar to the case of North Dakota oil wells whose oil will likely be transported via Dakota Access and like the name Dakota itself, the Comanche Trail Pipeline’s nomenclature originates from a Native American tribe.

Today the Comanche Nation is headquartered in the southwestern part of Oklahoma in Lawton and was removed from Texas in the aftermath of the Comanche Wars. As part of those wars, this nomadic tribe used the Comanche Trail which crossed West Texas and through what is now Big Bend National Park.

Like many other tribes, the Comanche Nation has come out in opposition to the Dakota Access Pipeline. Some members have formed a support group called Comanches on the Move, which has taken caravans on the road from Oklahoma to the Sacred Stone Camp in North Dakota.

The same month the Obama administration permitted the Comanche Trail and Trans-Pecos pipelines, the U.S. and Mexican governments announced the signing of an agreement creating the U.S.-Mexico Energy Business Council. This council’s objective is “to bring together representatives of the energy industries of the United States and Mexico to discuss issues of mutual interest.” Its membership list is a who’s who of major oil and gas players.

The list includes a senior-level lobbyist for Halliburton; the president of oil and gas industry services giant Honeywell Mexico; the CEO of Hunt Consolidated Energy (and former energy policy adviser for George W. Bush’s 2000 campaign); the CFO of Sempra Energy’s Mexican subsidiary, IEnova; and the president of the Petroleum Equipment Suppliers Association (PESA), who worked on the press team in the George W. Bush White House and 2000 presidential campaign.

PESA members—including Halliburton (Halliburton’s Robert Moran, a councilmember, serves onPESA’s Board of Directors) and other oil and gas industry services companies—will serve as among the biggest winners of Mexico’s ongoing energy sector privatization.

Hunt, meanwhile, serves as a symbol of the contradiction existing between U.S.-Mexico energy relations and U.S.-Mexico immigration policy. Prior to its involvement in the U.S.-Mexico Energy Business Council, Hunt was actually the first company to have a “holes in the wall” open border policy. Under the George W. Bush administration, this policy allowed energy to flow between borders, with gas flowing to real estate owned by the powerful and wealthy Hunt family.

“Over the years, Hunt has transformed his 6,000-acre property, called the Sharyland Plantation, from acres of onions and vegetables into swathes of exclusive, gated communities where houses sell from $650,000 to $1 million and residents enjoy golf courses, elementary schools and a sports park,” wrote the Texas Observer in 2008. “The plantation contains an 1,800-acre business park and Sharyland Utilities, run by Hunt’s son Hunter, which delivers electricity to plantation residents and Mexican factories.”

Hunt was also one of the companies recently approved to bid on offshore oil parcels on the Mexico side of the Gulf of Mexico.

The creation of the U.S.-Mexico Energy Business Council comes as Mexico continues to make its push to privatize its energy sector under the auspices of constitutional amendments signed into law in 2013 and move away from the state-owned system run by Pemex (Petróleos Mexicanos). Under then-Secretary of State Hillary Clinton, as first reported by DeSmog, the U.S. State Department helped spearhead those privatization efforts.

“The council, comprised of private sector representatives from both countries, is expected to exchange information and industry best practices in order to provide actionable, non-binding recommendations to both governments on ways to strengthen the U.S.-Mexico relationship on trade, investment and competitiveness in the energy sector,” read the press release announcing the council’s launch.

At a joint press conference featuring Mexico’s President Enrique Peña Nieto and President Obama held at the White House on July 22, Obama mentioned the council and its looming first meeting.

“This fall, our new U.S.-Mexico Energy Business Council will meet for the very first time to strengthen the ties between our energy industries,” said Obama. “And, Mr. President, I want to thank you for your vision and your leadership in reforming Mexico’s energy industry.”

With most eyes on the immigration debate and Republican presidential nominee Donald Trump‘s grandiose claims about building a “beautiful wall” on the U.S.-Mexico border, it’s easy to forget that proverbial walls are coming down when it comes to energy, and in particular, the flow of oil and gas across the border.

“As long as the wall doesn’t go below ground,” one industry executive recently told Financial Times, “I think we’ll be OK.”

Thanks to the regulatory blessing of the Obama administration, Energy Transfer Partners may be the first beneficiary to go “under the wall” with its Trans-Pecos and Comanche Trail pipelines.