A forthcoming Native American restaurant in the Minneapolis-St. Paul area just set a crowdfunding record. The wildly successful Kickstarter campaign from chef Sean Sherman, a.k.a. The Sioux Chef, brought in nearly $150,000 from 2,358 backers in 30 days; as the Star Tribunereports, that’s more individual backers than any other restaurant to ever raise funds on the platform.

Per Eater Minneapolis, Sherman specializes in “First People’s cuisine, or pre-contact Native American fare,” utilizing ingredients like native plants, wild game and fish, and corn, squash, and beans, but no dairy, sugar, or wheat. He already owns and operates a food truck, the cleverly named Tatanka Truck, and hosts frequent pop-ups and catering events in Minnesota and the surrounding states.

The restaurant will be called The Sioux Chef: An Indigenous Kitchen and will feature “traditional cooking on open comal grills,” Eater Minneapolis notes; it will also house a culinary education center for indigenous peoples.

The Kickstarter campaign drew backers from as far off as New Zealand. One backer wrote: “I’m happy to see this kind of project. I’m an enrolled tribal member of the Washoe Tribe of Nevada and is great to see our people making advances like this.” 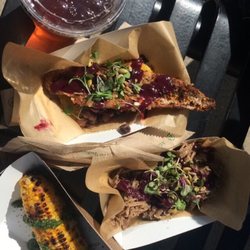 Native American cuisines are wildly underrepresented in U.S. restaurants: The dining capital of New York City has precisely zero Native American restaurants, for instance. But as the local-seasonal mantra and foraging have taken hold in recent years, perhaps we’re finally on the brink of seeing a surge in indigenous restaurants that’s long, long overdue.

The $148,728 raised also makes The Sioux Chef the sixth most-funded restaurant in Kickstarter history. Crowdfunding has revolutionized restaurant financing in recent years; instead of relying on private investors who typically hand over cash in exchange for part ownership and a percentage of the profits, budding restaurateurs can instead lean on their communities to fund their projects with considerably less strings attached.