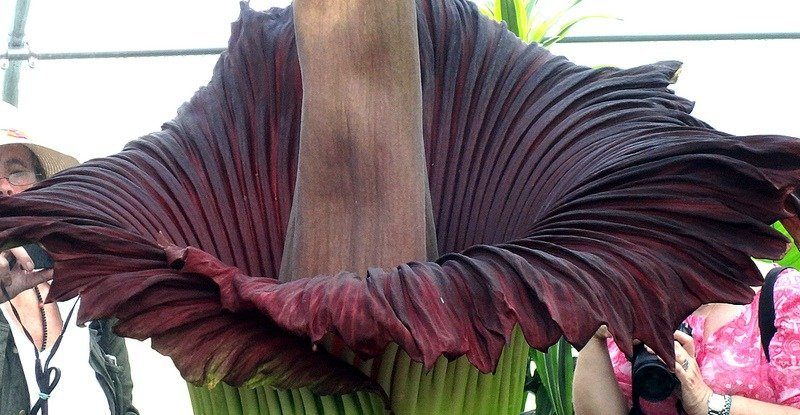 Botanists across the US are trying to figure out why so many titan arums – better known as corpse flowers – are blooming simultaneously around the country this year.

This is super weird, because there have only been 157 recorded blooms ever between 1889 and 2008. But this year in the US alone, at least seven flowers have bloomed.

Before we dive headfirst into this foul-smelling mystery, what’s a corpse flower, and why are botanists so into them?

The scientific name for corpse flowers is Amorphophallus titanium, which literally means “giant misshapen penis” in Latin (no, really).

They not only produce one of the biggest flowering structures in the world, sometimes reaching heights of over 1.8 metres (6 feet), their scent happens to mimic the distinct stench of decomposing flesh, with a bit of old fish mixed in.

Native to parts of western Sumatra, these gigantic flowers bloom about once every six years, giving everyone in their vicinity a good whiff of their natural perfume.

Botanists have suggested that this noxious smell helps to attract flies and other insects that typically eat decaying material, so they can pollenate the flower. So you can think of the corpse flower as a kind of ‘anti-flower’, because instead of attracting pollinators with its sweet smelling nectar, it attracts them with carrion-like smells. Since the flowers are so large and produce such powerful smells, it takes a lot of time and energy for the plant to reach bloom, making it a pretty rare sight.

This year, though, is different. So far, seven corpse flowers have bloomed around the US within months of each other, which – given that it takes so long for a corpse flower to develop – is an anomaly that botanists would love to get to the bottom of.

The problem is that the blooms are so rare, the research behind them is still in its infancy. One of most popular hypotheses right now is that the rampant blooming is due to US greenhouses and botanical gardens sharing seeds with one another, meaning most of the corpse flowers that are currently blooming are likely related (think: cousins).

But, as Guy-Ryan points out, many greenhouses say they’re not sure of the exact origin of their corpse flower seeds, which makes this hypothesis very difficult to prove.

Another hypothesis is that corpse flowers are more popular now than ever among botanical gardens in the US, so more are blooming because, well, there are simply more of them.

Just last week, a corpse flower at the New York Botanical Garden began blooming, and another at the US Botanic Garden in Washington, DC – named Charlotte – showed signs of blooming this week, making this extraordinarily rare event seem not so rare after all.

If you happen to be near a botanical garden that has a corpse flower, you should definitely check it out (if you can stand the smell), because no one knows when this opportunity will come around again.