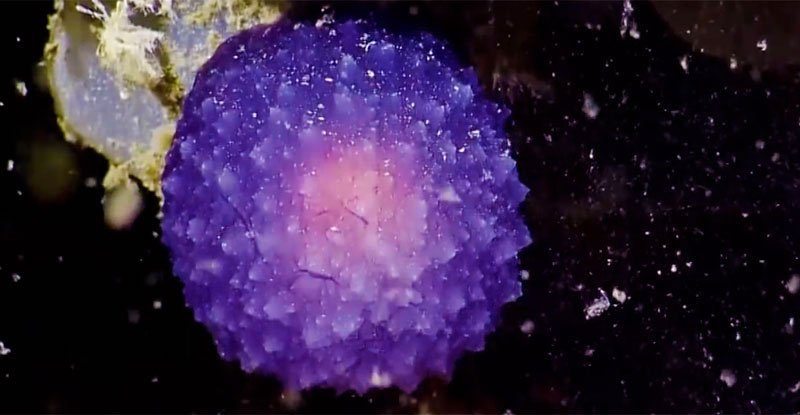 Strange as it may seem, not absolutely everybody is hunting for rare Pokémon on their phones right now.

While the rest of us are glued to Pokémon Go, working scientists are continuing their quest to find, you know, actual new lifeforms – and a team of marine biologists combing the ocean floor off the coast of Southern California might just have hit pay-dirt, coming across this weird, glowing purple blob.

Discovered by scientists from the Ocean Exploration Trust on the research vessel E/V Nautilus, the purple blob is as yet totally unidentified – creating no small amount of excitement among the researchers as they find it, which you can enjoy in the video below.

In fact, the coolest thing about this discovery – apart from the fact that we might have just stumbled upon an entirely new species, of course – is seeing just how much fun the biologists are having as they make their find, throwing out nicknames like Blobus Purpilis and wondering just what the hell this thing is.

Observing the organism from a camera on their remotely operated underwater vehicle (ROV) – which was actually there to study coral – the team speculates about what the glowing orb is, suggesting that it could be a marine invertebrate called a tunicate, or some kind of egg sac containing an embryo.

“I’m stumped, I have no idea. I can’t even hazard a guess,” one of the researchers admits to her own amazement.

Another scientist ponders whether it’s some kind of undersea spider egg sac, at which point somebody says, “Let’s leave it then… we don’t want to mess with spider egg sacs.” Marine biology gold!

Just as the researchers are about to extend one of the ROV’s arms to extract the blob for analysis, there’s a moment of comic tension as a wandering crab appears to make a play for the blob itself.

Eventually, once the crab scuttles off a ways, the team uses a suction tube to get a hold of the blob, and now the researchers will have a chance to examine the find and maybe figure out just what this mysterious purple orb is.

Although, as the end of the video makes clear, it could take scientists several years to determine if the organism is indeed a new species – so we’re just going to have to wait, guys.

You can find out more about the E/V Nautilus’s ongoing research mission at the vessel’s web site, and be sure to check out their live feed too – because you never know when the next alien-esque sphere thingy is gonna show.