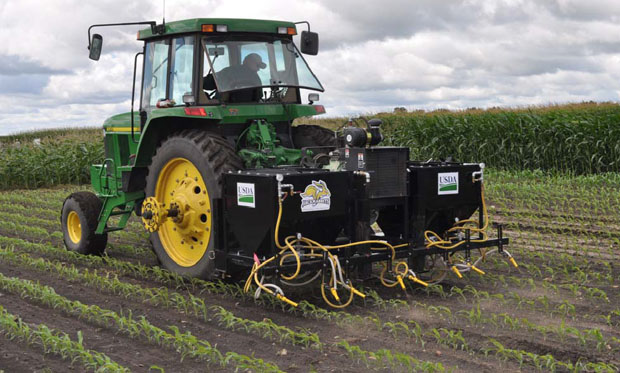 Using bits of corncob instead of chemicals to control weeds sounds pretty interesting, doesn’t it?
Frank Forcella, a research agronomist for the U.S. Department of agriculture, has been spraying gritty substances like bits of corncob, walnut shells, or soybean meal around crops to kill juvenile weeds without causing harm to corn or soybeans. His new method of weedkilling by utilizing compressed air is getting lots of attention from organic farmers who don’t use chemicals on their crops. With more and more consumers demanding products without agrichemicals, food companies have shown massive interest as well.
“It obliterates the weed, especially if it’s a small broad-leaved weed like Lamb’s quarters or pigweed that’s one to 3 inches high,” Forcella said. “The corn plants growing next to them are taller and thicker and can withstand the grit blast, but the weeds just disappear.”
At first, Forcella sprayed rows of his crops by hand, using an air compressor mounted on an ATV. He then collaborated with a South Dakota State University engineer, and created an improved version. Now able to spray four rows at a time, the unit is mounted on a tractor and contains eight nozzles. His device depends on the durability and strength of crops like corn to withstand the forceful blast while the user “obliterates” the unwanted weeds. “We’ve been getting season-long weed control of about 80 to 90 percent, which isn’t perfect, but most organic farmers would be happy with that amount of weed control,” Forcella said. The technique Forcella uses requires that the fields are sprayed twice- once when the weeds are approximately 4 inches tall, and secondly when they are more mature.
Interestingly, his technology could one day be combined with fertilization. Crops would be nourished with granular, nitrogen-rich nutrients, while the weeds are shredded and destroyed.
“It’s not anything that’s wide-scale yet for sure, but we’re hoping,” Forcella said. “We never thought it would work, but it did work.”
Featured image source
Written by Raven Fon