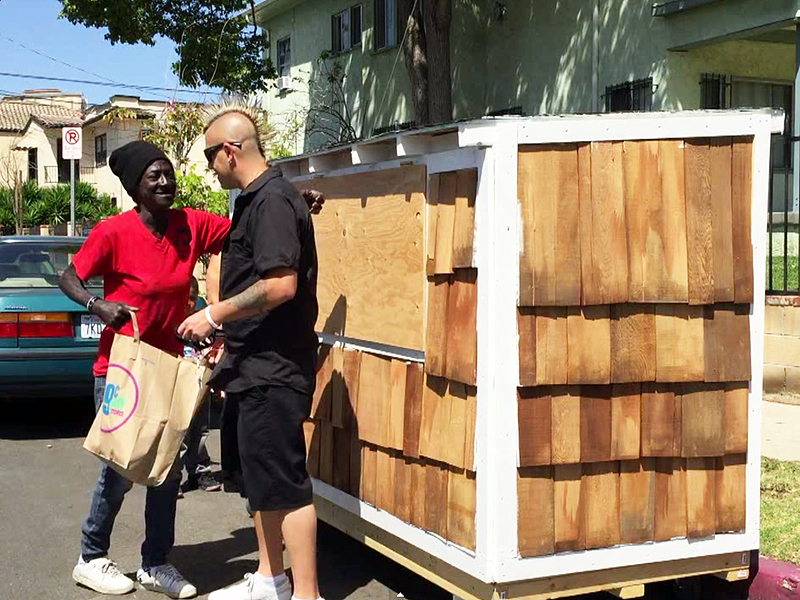 Starting Human is making changes in the world. Small steps that are leading to a massive difference. By helping homeless people in their community, Starting Human has definitely made some people feel better about their lives. We often get so carried away with our own lives that we forget one simple truth – we are all connected. How can we blindly pass by other human beings who are suffering in the streets, sleeping on benches or in dirt, and not even try to do anything to help them? Starting Human has an idea – build tiny houses. Even having somewhere to lay your head at night, which you can call your own and feel safe, is more than a lot of people in this world can enjoy.

Elvis Summers is a 38 year old male who created Starting Human. He first started building tiny houses with inspiration from Irene ‘SMokie’ McGee, who was living on the streets for over ten years. Summers discovered her sleeping on the pavement without even a cardboard box beneath her. Summers told The Independent, “I knew she was homeless, but only found out about three weeks ago that she didn’t even have a tarp or a cardboard box to sleep in.”

He continued, “I can barely keep my own lights on, but I saw that a 60-year-old woman was sleeping literally in the dirt, next to a house – a house where everybody carries on with their happy, warm lives, enjoying their hot showers, and toilets to use, the food in their fridge, clean water to drink, electricity, TV, etc.

“I went right to the hardware store and decided to buy the materials to build her a tiny house so she could at least have a warm,safe place to sleep instead of the dirt. It was more important than a couple bills which I’m sure I can pay late and catch up on.”

The next five days, Summers spent building a home built from donated materials and $500USD worth of wood.

“Marvelous” is how McGee described her feeling upon receiving the keys to her new house. “You can’t even explain how I feel,” she told ABC News. “I’m on my way to a different life. I want to get my own place and all of that. He’s my guardian angel.