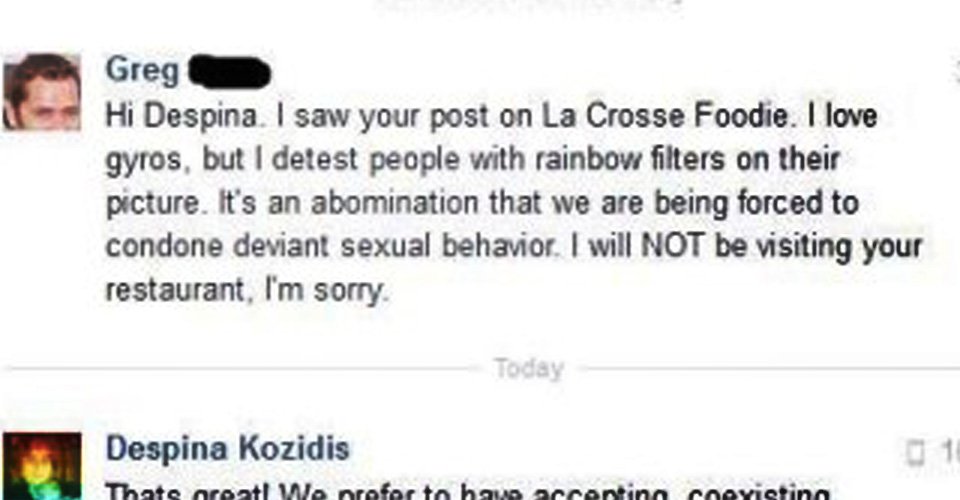 RECENTLY, A TEA PARTY ACTIVIST AND A RESTAURANT OWNER HAD A SHOWDOWN ON FACEBOOK DUE TO A RAINBOW-FILTERED PROFILE PICTURE.

La Crosse, Wisconsin is the home of Gracie’s Gyros and Wraps. This is where the owner, Despina Kozidis, spends most of her time, but she is better known here as Gracie.

Despite being an astute businesswoman, Gracie made the common mistake of mixing business and politics. On the plus side, she was doing it for a very good reason.

Just like countless other allies who had switched their profile picture to a rainbow-filtered image, Gracie decided to show her support for equality and fairness. Not exactly a move you would consider to be ‘controversial’.

After changing her profile picture, Gracie started browsing a La Crosse foodie page. She noticed someone asking for local eatery recommendations, and took the opportunity to mention her business.

The following morning, Gracie was devastated. She called Sophia, her daughter, and tried to explain what happened through her tears.

Greg Luce, another member of the foodie page, sent Gracie this message:

“Hi Despina. I saw your post on La Crosse Foodie. I love gyros, but I detest people with rainbow filters on their picture. It’s an abomination that we are being forced to condone deviant sexual behavior. I will NOT be visiting your restaurant, I’m sorry.”

Gracie was blown away by the negativity and abrasiveness of the message.

Sophia told the LaCrosse Tribune, “The culture that she’s grown up in is sometimes not very accepting, but in coming to the U.S., being a single mother, having a business, she’s learning every day how to be a part of the community, how to be accepting.”

After considerable thought, and deliberating on whether she should even respond at all, Gracie wrote back to Luce, saying:

“That’s great! We prefer to have accepting, coexisting consumers. It seems we have come to an agreement that it is best for both parties that you do not visit my business. Thank you.”

After hitting ‘send’, Gracie was worried that her response might have been too confrontational. Sophie supported her and assured her it was the right move.

In fact, Sophie was so sure it was the right move, she took a screenshot of the exchange between Luce and her mother, and shared it to the La Crosse foodie group (crossing out Luce’s last name, of course).

Luce reported the image as ‘inappropriate’, and it was subsequently removed…but not before it gained some attention.

Messages offering support and showing appreciation flooded Gracie’s page. The support didn’t stop there though. The community brought it to her restaurant.

The day after Sophie posted that famous screenshot, Gracie’s restaurant was filled with customers showing their gratitude. A Facebook event was even created called, “Showing Support For Gracie’s”, in effort to increase her business.

“I lost one person, but I gained hundreds. I was crying actually,” Gracie said.

This article was originally published on Unified Soul Theory.