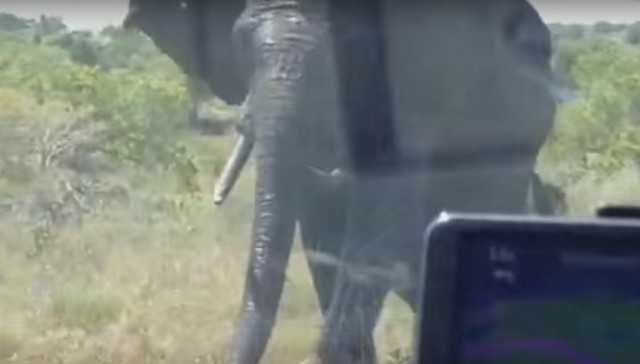 During a safari, a man honked at a wild bull elephant who approached his car. He shouldn’t have honked…

When you’re adventuring in the wild, it’s especially important to have respect for all beings you come across. From tiny, bumbling insects to massive land creatures like elephants, there are species that will cross your path that you don’t want to get in a fight with.

Unfortunately, a man had to learn this lesson the hard way while he was on a safari in Mozambique’s Maputo Game Reserve

As can be seen in the video, a large bull elephant approached the man in his vehicle, visibly agitated. Instead of backing away or staying silent, the tourist then honked. What the bull elephant did next is a huge learning lesson for the man and other travelers.

According to Traveller 24 News, the driver survived the attack, but it is unknown what the extent of his injuries are. The car, however, wasn’t so lucky. Broken windows, countless dents, and dirt in nooks and crannies resulted from the elephant’s attack.

The elephant didn’t leave unscathed either, however. Evidently, a piece of his tusk broke off during the skirmish.

The video and photos were uploaded to Facebook by Rudie Swanepoel, who left a comment that applies to all animal encounters:

This article (Tourist Learns The Hard Way To NEVER Honk At An Elephant [Watch]) is free and open source. You have permission to republish this article under a Creative Commons license with attribution to the author and TrueActivist.com