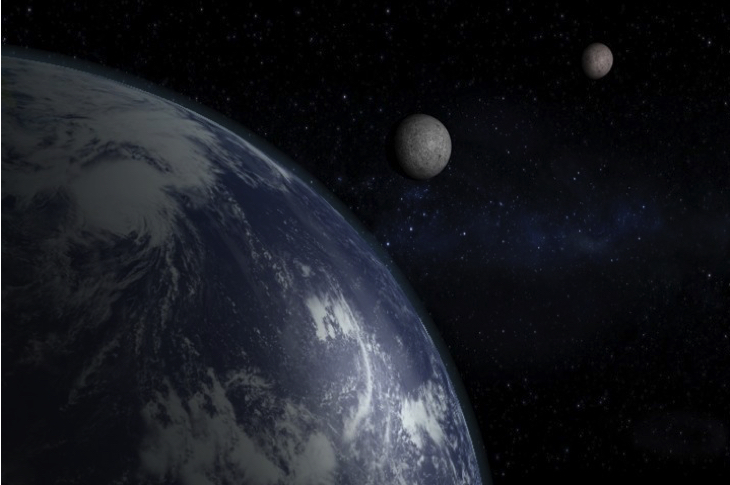 It’s been confirmed that the moon is no longer Earth’s only cosmic companion.

NASA reported this month that a mini-moon, affectionately named asteroid 2016 HO3, has been orbiting Earth for only about 100 years and may stick around for a few centuries.

“One other asteroid — 2003 YN107 — followed a similar orbital pattern for a while over 10 years ago, but it has since departed our vicinity. This new asteroid is much more locked onto us. Our calculations indicate 2016 HO3 has been a stable quasi-satellite of Earth for almost a century, and it will continue to follow this pattern as Earth’s companion for centuries to come.”

Deemed a quasi-satellite, the asteroid appears to pose no threat to Earth and is no more than 300 feet wide, which is likely why scientists just barely spotted it in April of this year.

The asteroid’s movements are complicated, as it spends half of its time closer to the sun than Earth and passes it before our planet, and then spends the other half of its time even farther away from us, causing it to eventually fall behind. The orbit is slightly tilted, causing it to engage in a bobbing motion once a year. Over multiple decades, 2016 HO3 also does a slow, back-and-forth twist.

Earth’s gravitational pull prevents the mini-moon from ever getting too far away or too close, ultimately keeping us safe in this temporary relationship.

“The asteroid’s loops around Earth drift a little ahead or behind from year to year, but when they drift too far forward or backward, Earth’s gravity is just strong enough to reverse the drift and hold onto the asteroid so that it never wanders farther away than about 100 times the distance of the moon.”

Though it isn’t exactly a moon as we know it, this asteroid is certainly the closest we’ve come to a second moon that we have been able to track. Chodas affectionately said of 2016 HO3,

“In effect, this small asteroid is caught in a little dance with Earth.”

Take a look at the video below, which demonstrates the asteroid’s pattern of movements.

This article (NASA Has Confirmed That Earth Now Has A Second Moon That’s Here To Stay) is free and open source. You have permission to republish this article under a Creative Commons license with attribution to the author and TrueActivist.com