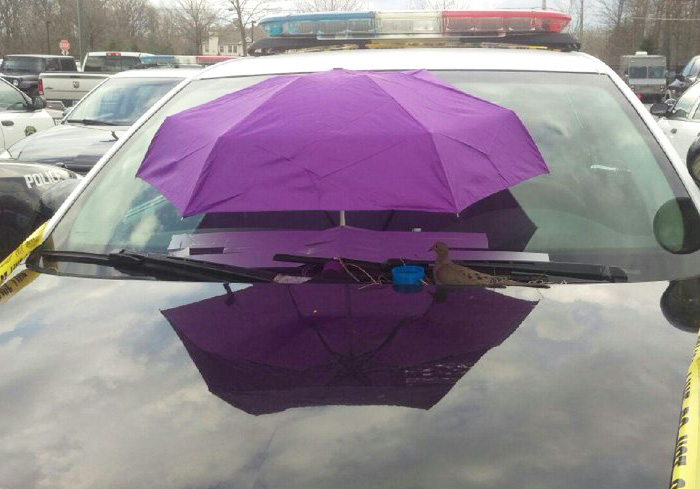 The eastern mourning dove is Wisconsin’s official symbol of peace. It’s also Michigan’s state bird of peace. But in Ohio, the mourning dove has a much higher status. Because only in Ohio can a mourning dove build a nest on a cop car and get away with it.

That’s what happened recently, when cops in Parma discovered that one of their backup patrol cars had been turned into a nesting place for one plucky dove. But instead of turning the feathered felon into a jailbird, the cops not only forgave this particular misdemeanor: they decided to make her even more comfortable. They attached an umbrella to the windshield to keep her safe from the elements and they taped off the parking spot so nobody would bother her. Then realizing that the dove (which they nicknamed Gerty) was probably hungry, the cops even dug up a bunch of worms to keep the expectant mom well nourished.

When cops in Ohio found a dove nesting in their patrol car, they knew they had to do something… So instead of removing her, they used an umbrella to protect the dove and even dug up worms for her! “Our officers are human beings just like anyone else,” said police spokesperson Kevin Riley. “We care for all lives, human and animal” Thanks to Bored Panda for this post | featured image source