Cows in Russia are being strapped with virtual reality (VR) headsets to help them produce more milk.

No, this isn’t a weird joke. Instead of letting cows be cows and wander fields freely, someone got the wise idea to make them wear headsets. There is heavy sarcasm in that last sentence.

The bizarre initiative, which is believed to be a world’s first, is being tested out on RusMoloko farm, close to Moscow.

The headsets show the cows a red-focused colour scheme, which mimics the shades of summer and gives them the impression they are stood in a field, with the intention of alleviating any anxiety they may be suffering from.

Announcing the programme, a spokesperson for Moscow’s agriculture ministry said: “Virtual reality architects created a unique summer field simulation programme based on numerous studies showing that cows are better at perceiving shades of red than green and blue tones on the colour spectrum.”

They went on to say that initial testing of the tech has gone well. 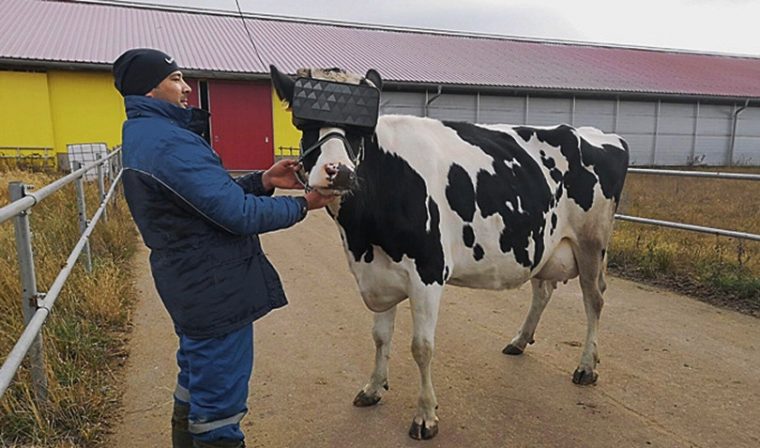 The spokesperson added: “During the first test, experts recorded a decrease in anxiety and an increase in the overall emotional mood of the herd.

“The impact of VR glasses on milk production will be demonstrated by further comprehensive study.”

The story has also been covered by YouTuber Jonny Tickle, who posted photographs of the VR clad cows stood in the fairly barren farmland.

A Moscow farm has decided to equip its cows with VR glasses in order to relax and feel happier. A calm environment leads to an increase in milk yield, so the cows are given a VR headset displaying summer fields.

He wrote: “A Moscow farm has decided to equip its cows with VR glasses in order to relax and feel happier. A calm environment leads to an increase in milk yield, so the cows are given a VR headset displaying summer fields”

But many of those who have since seen the photos have responded negatively, with one person even likening it to an episode of Charlie Brooker’s dystopian sci-fi series Black Mirror.

Commenting on Jonny’s post, one person wrote: “Why not just treat them nicely, give them more space, surroundings and stop forcing them to produce. I mean, just sayin.”

A second wrote: “I don’t watch Black Mirror, but from what I hear this would be an episode.”

While another joked: “Did someone already make the joke about cows watching moo-vies? … I’ll show myself out.”

Keep Reading: The Truth About The Milk Myth: Why Milk Is Bad For Your Bones