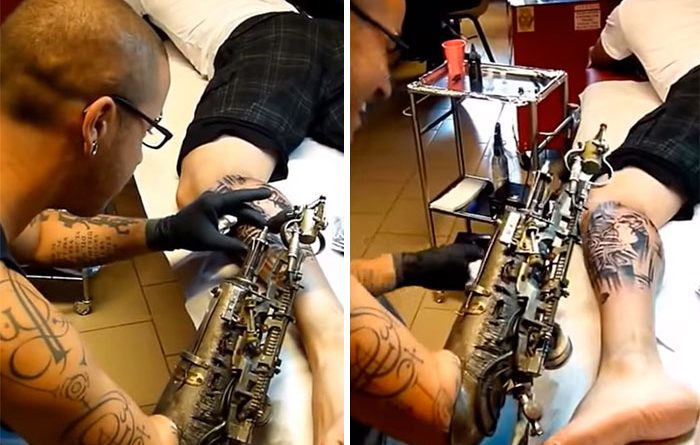 Tattoos are a great way to express yourself-  your love for your favourite team, your favourite artist, or sometimes they are a way to express just how much you can drink; like when you stumbled home with an image of a rhino making love to a bee on your left buttock.  If you are the kind of person who thinks tattoos are something to enjoy, you aren’t alone. In fact, some people enjoy giving them more than receiving them- or maybe it’s about equal.

JC Sheitan Tenet is one of those people who thinks tattoos are awesome, and he is making a career out of decorating people’s bodies with inked art. But there is something quite remarkable about him: Tenet lost his arm 22 years ago, and is now wearing a prosthetic device that doubles as a tattoo gun! Tenet partnered with Gonzal (Jean-Louis Gonzalez), an artist and engineer to make the first prototype of the aptly called “kinetic sculpture.” “Tenet wanted to draw tattoos with an arm that he’d never used for that before, and I thought it was a great idea to mechanise a prosthetic,” Gonzal told Motherboard. “The aim was to fix the tattoo machine to an aesthetic version of his prosthetic arm.” “What started out as a sculpture is now something that I can use,” said Tenet. “We understood that we didn’t have to recreate a hand as a prosthetic; we just had to create a tool that is better than a hand.”

Whether you are an avid lover of tattoos, or if you prefer to keep your skin ink-free, you have to admit that this is pretty incredible stuff. Science, technology and art coming together to fulfill someone’s dream- yeah, life is good.

Check out the video below to see Tenet in action:

What do you think? Would you love to get a tattoo done by someone with a bionic arm? I think it sounds pretty darn cool! Be sure to let us know what you think in the comments, and share with your friends.