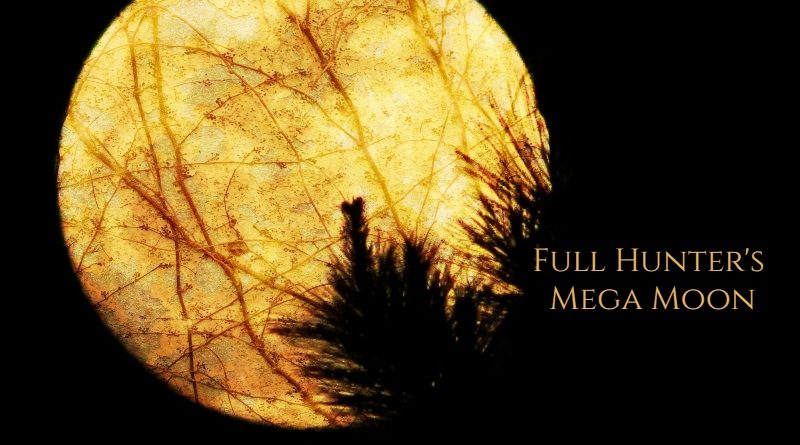 The spookiest month of the year just got a whole lot spookier thanks to a mega full moon on the 13th.

October is best known for being the month of all things Halloween. It’s the time of year when we are more prone to believing in ghosts and superstitions, and most spooky things in general. It’s the month that this year’s Full Hunter’s Moon has chosen to fall in this year (October 13, to be exact), and it’s going to be bigger and better than ever.

However, the Moon won’t be visible in the sky until right around sunset that evening, and will set around sunrise the next day. It’s the only night in the month when the Moon is in the sky all night long.

Because the Hunter’s Moon rises from the horizon around sunset, it may appear bigger and more orange than your typical full Moon—but don’t be fooled by the “Moon Illusion,” which makes the Moon appear larger than it really is!”

When the Moon is high overhead, it is dwarfed by the vast hemisphere of the heavens and appears to our eyes as a small disk in the sky.

By contrast, when the Moon is low, it is viewed in relation to earthly objects, such as chimneys or trees, whose size and shape provide scale. Your brain compares the size of the Moon to the trees, buildings, or other reference points, and suddenly, the Moon looks massive!

But why is the moon SO ORANGE?

When the Moon appears extra-large near the horizon, you may also notice that it seems to be more orange or red in color. This is where Earth’s atmosphere comes into play.

When the Moon is low in the sky, it is farther away from you than when it is directly overhead. Because of this, the light that’s being reflected off of a horizon-hugging Moon has to travel a farther distance—and through more particles of air—to reach your eyes.

By the time we perceive this light, the shorter wavelengths of light (the “blue” ones) have been scattered by the air, leaving only the longer wavelengths (the “red” ones) to reach our eyes. Thus, to us, the bluish hues are filtered out and the Moon takes on an orange tinge.

This particular full Moon is known as the Full Hunter’s Moon because it once signaled the time to go hunting in preparation for winter, according to the Farmer’s Almanac. “Since the harvesters had recently reaped the fields under the Harvest Moon, hunters could easily see the fattened deer and other animals that had come out to glean (and the foxes and wolves that had come out to prey on them),” the website says. The more you know!