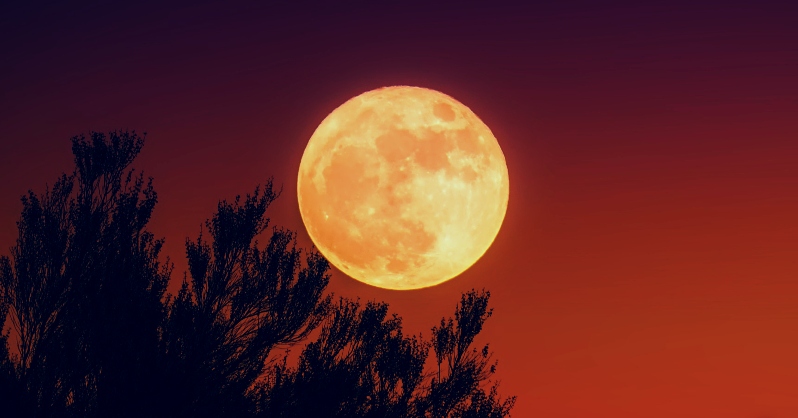 According to Farmers’ Almanac contributing astronomer, Joe Rao, this combination is a once-in-a-20-year occurrence, so your next chance to see one is August 13, 2049.

That’s right, the combination of a full moon and Friday the 13th only happens every 20 years or so, and we have one this Friday. We have not had a nationwide full moon on Friday the 13th since October 13th, 2000. 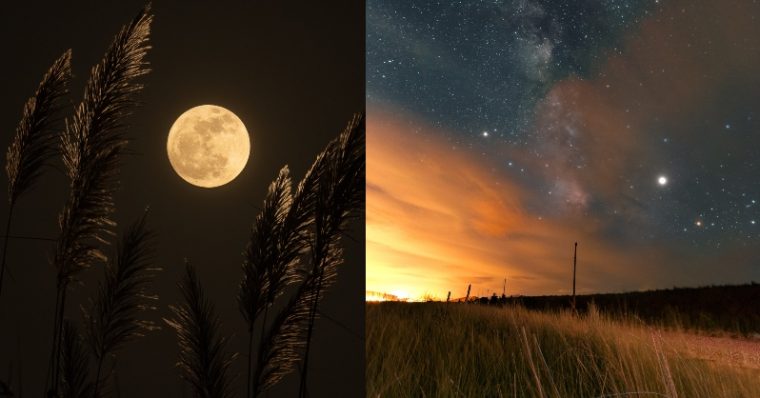 This rare sighting of the Harvest Moon occurs when a full moon is closest to the autumnal equinox.

If you’re in the Central, Mountain, or Pacific time zones, you’ll be able to this unique full moon once the sun sets, and don’t be alarmed if you notice it’s a little brighter than usual outside.

While all full moons rise at sunset, the fact that the Harvest Moon has a shorter rising lag on successive days means that we get what appears to be a full moon rising near sunset for more days than usual; this gave farmers a “sunset extension” of sorts, which went to good use during the very busy time of harvest.

But for those of us on the East coast, we’ll see the Harvest Moon just after midnight—at 12:33 a.m. on Saturday, the 14th. And although it may not seem as thrilling, you’ll still be able to witness the Harvest Moon, which actually has the potential to also be a Supermoon or a Micromoon. The event nearly coincides with apogee—that point in its orbit which places it at its greatest distance from the Earth: 252,100 miles away. So, don’t be surprised if you hear people say that the moon appeared to be bigger or smaller than normal, because there’s a real chance of either happening.

No luck if you’re on the equator, though.

There is no Harvest Moon at the equator and not enough of one to say so in the tropical regions of the globe. You really have to be well north (or south) of the tropics to observe the year’s grandest parade of moonlit nights around the time of the autumn equinox. The farther north or south of the Earth’s equator you live, the longer the procession of moonlit nights accompanying the Harvest Moon.

EarthSky reports, “The term Harvest Moon might be of European origin, because northern Europe is much closer to the Arctic than the tropics. Before the advent of artificial lighting, people planned nocturnal activity around the moon, knowing the moon provides dusk-till-dawn moonlight on the night of the full moon. But farmers of old were also aware that the Harvest Moon – the closest full moon to the autumn equinox – could be relied upon to provide dusk-till-dawn moonlit for several days in a row at mid-temperate latitudes, or even as long as a week straight at far-northern latitudes.”

So, whether you are ready for a spooky Halloween this year, you should definitely be ready for the grand precursor- the Full Harvest Moon on Friday the 13th.