This has to be the absolute worst thing to say to a parent of a child who is differently-abled.

Katlyn Oelke of Wisconsin has blasted a local hair salon for their refusal to cut her son’s hair. Oelke’s son Matthew has Down syndrome and had been to the salon previously for haircuts, but his usual stylist was unavailable. The salon responded with a message to the mother stating they could no longer cut his hair because he was “not a good fit.”

Katlyn’s son Matthew has been diagnosed with Down syndrome and requires special attention for his hair cuts. The family had previously chosen this salon for their advertised special care for “all” children.

According to Katlyn, Matthew had been seen in the salon previously without incident but was admittedly nervous and required extra care. The stylist who had handled him in the past was not available for this newest appointment request. 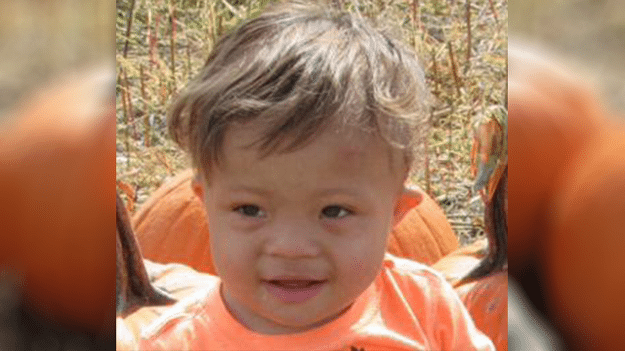 After calling to make the appointment, Katlyn received a message from the salon owner stating they could no longer cut her son’s hair. They stated merely that he was not a “good fit.”

Not a Good Fit. 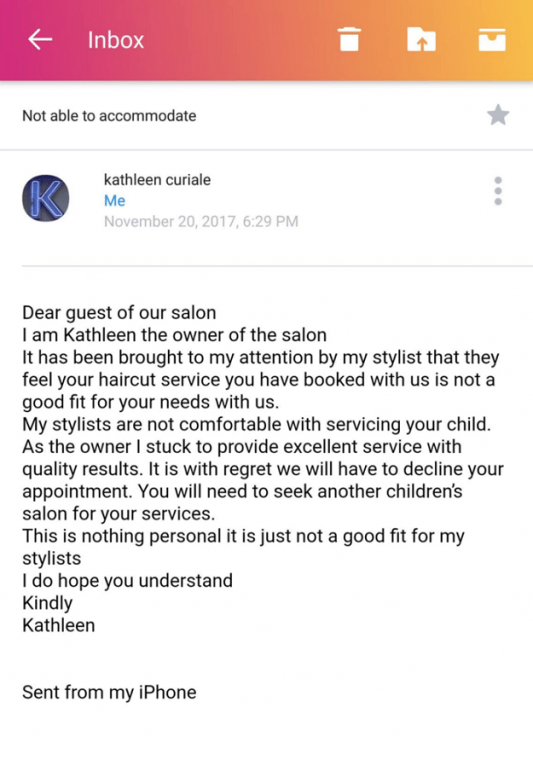 According to the letter written via iPhone and sent from the salon’s owner, Kathleen Curiale, the “stylists are not comfortable with servicing your child.” The letter managed to do nothing more than infuriate thousands of people.

The owner went on to say, “You will need to seek another children’s salon for your services. This is nothing personal it is just not a good fit for my stylists.” Katlyn took to social media following the message and the out-pour of angry friends and comments went wild.

Many people spoke up in support of the Oelke family by saying they had similar experiences and shaming the salon for discriminatory practices.

Katlyn stated her biggest issue was not receiving a full and meaningful explanation for being dropped from their client list. “If she would have called, explained her concerns – because not once was safety brought up. until people were getting at her,” Oelke said.

Katlyn told reporters she would have understood if the owner had explained her concerns more fully. As it is, she feels as though the salon is only covering its tracks now that they are being accused of discrimination. 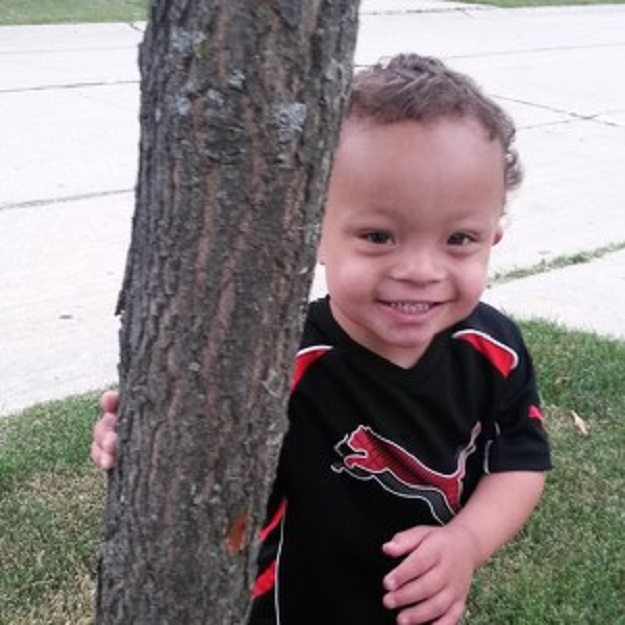 Matthew’s regular stylist, Justine Rossey was unavailable during the appointment time his mother requested online initially. “Basically, all that it was about is the stylist that was able to work with a child that’s moving because we don’t want to injure anybody,” she said.

Unfortunately for the salon, the internet wasn’t having any of their “safety” explanation. The backlash continued whipping around with hate and disgust for all involved in the situation at the salon. 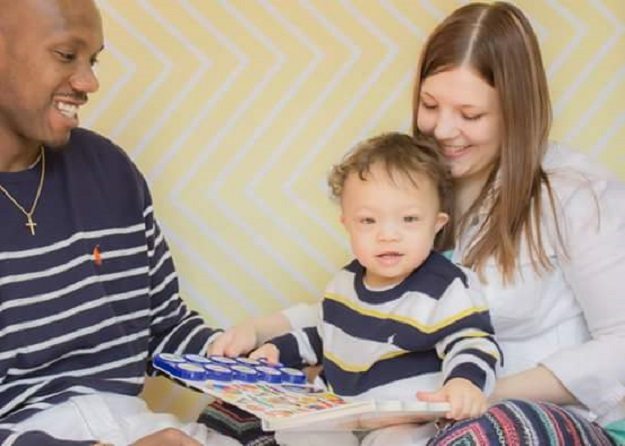 Some people even took to writing reviews on the company’s Facebook site and giving them derogatory marks. The ratings were so much that they pulled the overall rating down from a 5.0 to a 2.6 with 84 people giving the place only one star.

According to later posts from the owner, she states her difficulty in finding quality stylists to suit the needs of her children clients. The salon, which advertises itself as “A Hair for Kids Salon” apparently has issues keeping it’s booths filled. 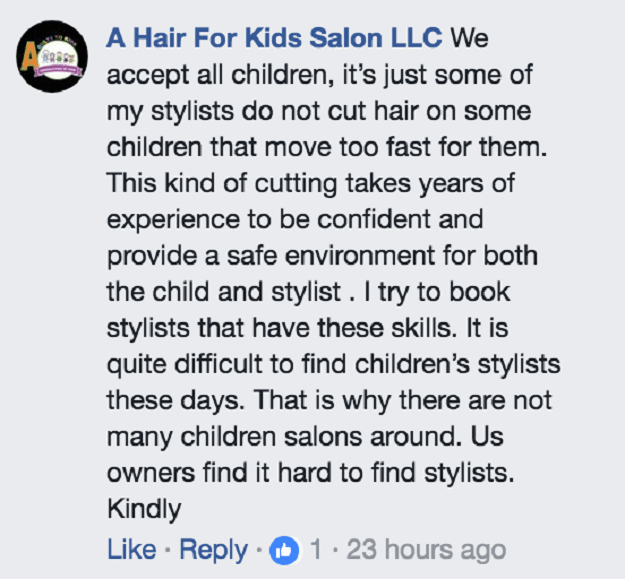 The final post from the salon owner stuck to the safety side of the explanation. “We accept all children, it’s just some of my stylists do not cut hair on some children that move too fast for them,” she stated.