To make matters worse, he did this horrible thing without her knowing- for two months.

A man has been labelled a ‘monster’ after he admitted to swapping his vegan girlfriend’s soy coffee creamer with dairy.

A post on Reddit revealed the inconsiderate trick in which the man secretly emptied his girlfriend’s soy creamer and filled it with dairy milk for two months.

When people make a decision to live together, they are forced to get adjusted to each other’s routine habits. It’s pretty easy if the partners’ lifestyles, preferences in time management, and even food are similar. Even then, they realize that compromising is inevitable and they try to make it comfortable for both of them.

But sometimes, the partners have directly opposite interests or likings, particularly when it comes to food. For example, people who follow a particular diet may not do it out of personal preferences, but for medical reasons as well.

In April 2019, one Reddit user shared an unusual story as some mass media report. He had been dating a woman for 3 years. When the couple decided to live together, he was faced with unforeseen “difficulties”: his girlfriend was a vegetarian and cooked only healthy vegetable meals. This eating habit helped her to fight acne.

Though he realised he was wrong to doubt his girlfriend’s dairy intolerance, the man showed little remorse for his actions as he said he was ‘doing it for her own good’.

The man decided to prove that food had no impact on her skin. He had been replacing her soy milk in her coffee with a regular one for two months and he assured everyone that he had only been doing that for her own good. Afterwards, he started noticing that she started to wear makeup all the time, even at home, and he was shocked once he saw her with no makeup on: her acne was back. As a result, the man decided to ask people for advice: whether he should confess to what he’s done. 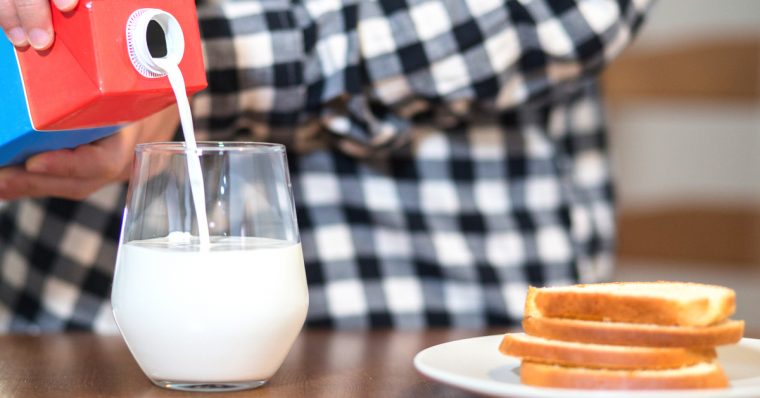 The man explained: “I thought I would prove to her that the whole ‘dairy gives me acne’ thing is in her head.

“For the past two months I’ve been emptying the same soy creamer container and filling it with dairy creamer.

“I was gonna do a big reveal, like ‘Surprise! You can eat whatever you want!’

“But she’s been wearing makeup both in and out of the house lately…and last night I saw her barefaced for the first time in a while and it is BAD.”

“So I figure I’ll just quietly throw out the dairy and her skin will go back to normal.” 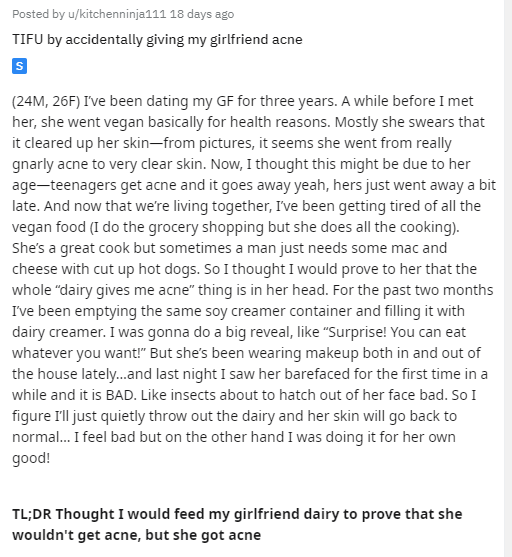 The responses were not in his favour, and in fact most people were angry at him for what he did.

One user wrote, “He’s a creep. If he so much wants Mac and cheese there are these places where he can go and buy one, rather than lying and potentially poisoning his girlfriend.”

Another said, “I’m no vegan but hope she finds out and ditches this unrepentant abuser. Fast. Could have had much worse results as she is clearly allergic.”

And one comment really put him in his place, “What part of consent is so confusing for this guy? Also, imagine conducting nonconsensual experiments on a woman in lieu of mansplaining how she doesn’t understand how foods impact her body.”

Lesson for the day: do not tell people what to do with their bodies, or assume you know more about their body than they do.