Travelling circuses will be banned from using wild animals as of next year.

Environment Secretary Michael Gove announced earlier today that the new Bill will prevent animals such as reindeer, zebras and camels – which are currently used – from performing as part of the ‘shows’.

As of last year there were reportedly 19 animals in travelling circuses in Britain – including three camels, a racoon and zebras.

The Wild Animals in Circuses Bill will make it illegal for circus operators in England to use wild animals in a bid to further the conservation of our understanding of wild animals.

Mr Gove explained: “Travelling circuses are no place for wild animals in the 21st century and I am pleased that this legislation will put an end to this practice for good.

“Today’s announcement follows other measures we have taken to strengthen our position as a world leader on animal protection.

“This includes our ban on ivory sales to protect elephants, and delivering Finn’s Law to strengthen the protection of service animals.” 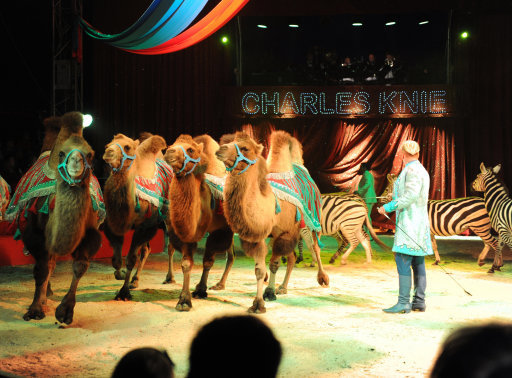 Today’s announcement follows a commitment in 2018 to introduce a ban by the time the existing interim licensing regulations expire in January 2020.

Naturally, a number of animal welfare charities have welcomed the news with Dr Chris Draper, Head of Animal Welfare & Captivity at the Born Free Foundation said: “After years of waiting for this issue to be resolved, Born Free is delighted that Mr Gove will now bring this Bill forward.

“The use of wild animals in travelling circuses is outdated and unpopular, and this legislation will bring England into line with a long and increasing list of countries which have banned this practice.

“Born Free and its supporters have campaigned for a long time for this outcome and we look forward to the swift progress of the Bill through Parliament.”

David Bowles, Head of Public Affairs at the RSPCA said: “We really welcome the Government introducing a Bill to ban the outdated practice of using wild animals in circuses.

“We’ve campaigned against having wild animals in circuses for many years. They have complex needs that cannot be properly met in a circus environment.

“It’s high time keeping wild animals in circuses is consigned to the history books and we look forward to the day that it is banned for good in England.”

I know how many people in Dudley South are concerned about the conditions that too many circus animals are kept in. I’m pleased that the Government is taking action to protect these magnificent wild animals. pic.twitter.com/3U4kxa9PpR

Jan Creamer, President of Animal Defenders International (ADI) said: “We are delighted and relieved that the UK Government is bringing in its promised legislation to ban wild animals in circuses.

“Animal Defenders International has documented suffering and abuse in UK circuses for more than 20 years and this long-awaited measure will stop circus suffering in England, and take us another step closer to the UK-wide ban the public want and the animals need.”