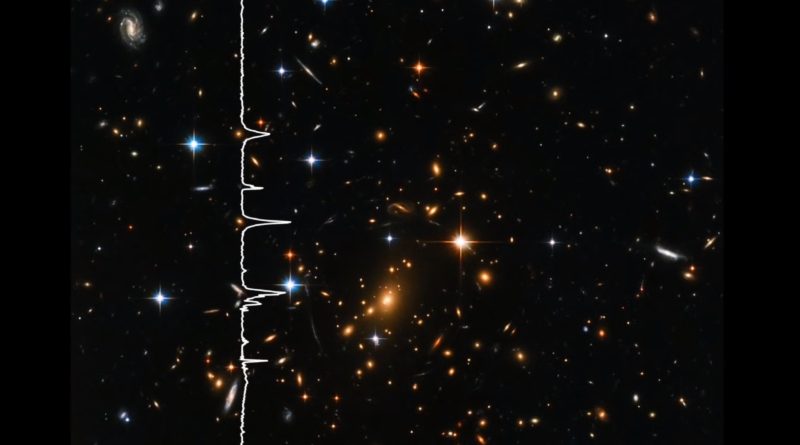 The Universe is a wondrous place, full of vast numbers of planets to explore, unsolved mysteries, and even ‘superbubbles’ blown by black holes.

But there’s one thing that space really isn’t: loud. Without Earth’s air molecules to help you hear, out there in space you’d be listening to a whole lot of silence.

Luckily, that hasn’t stopped NASA from figuring out a way to produce sound in the soundlessness of space – by ‘sonifying’ the above image taken by the Hubble Space Telescope.

Yep, move over music, podcasts, or audio-books- the new thing to listen to is Hubble images.

The image NASA used for this project was taken by the Hubble’s Advanced Camera for Surveys and Wide-Field Camera 3 back in August last year.

The guys working with Hubble call the image a ‘galactic treasure chest’ because of the number of galaxies splattered across it.

“Each visible speck of a galaxy is home to countless stars,” NASA explains about the image.

“A few stars closer to home shine brightly in the foreground, while a massive galaxy cluster nestles at the very centre of the image; an immense collection of maybe thousands of galaxies, all held together by the relentless force of gravity.”

But as beautiful as this image already is, it just reached a new level, once transformed into a stunningly eerie musical composition.

The team that created the sonified image explains that the different locations and elements of the image produce different sounds.

Stars and compact galaxies are represented by short and clear sounds, while the spiralling galaxies emit more complex, longer notes.

“Time flows left to right, and the frequency of sound changes from bottom to top, ranging from 30 to 1,000 hertz,” NASA explains in comments accompanying the video.

“Objects near the bottom of the image produce lower notes, while those near the top produce higher ones.”

And although it might sound a little eerie at first, the ‘sounds’ of this picture create a rather beautiful melody, especially near the middle, when the sound reaches a galaxy cluster called RXC J0142.9+4438.

“The higher density of galaxies near the centre of the image,” the team explains, “results in a swell of mid-range tones halfway through the video.”

So there you have it: an entirely new way to enjoy the Universe.