As long as an adult thumb, with jaws like a stag beetle and four times larger than a honeybee, Wallace’s giant bee is not exactly inconspicuous.

But after going missing, feared extinct, for 38 years, the world’s largest bee has been rediscovered on the Indonesian islands of the North Moluccas.

A search team of North American and Australian biologists found a single female Wallace’s giant bee (Megachile pluto) living inside a termites’ nest in a tree, more than two metres off the ground.

“It was absolutely breathtaking to see this ‘flying bulldog’ of an insect that we weren’t sure existed any more,” said Clay Bolt, a specialist photographer who obtained the first images of the species alive. “To actually see how beautiful and big the species is in life, to hear the sound of its giant wings thrumming as it flew past my head, was just incredible.” 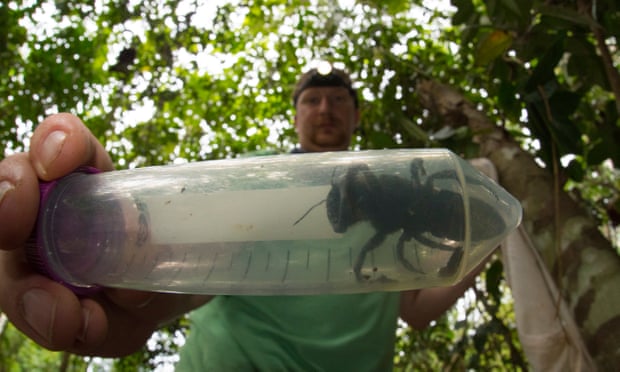 The giant bee – the female can measure nearly 4cm in length – first became known to science in 1858 when the British explorer and naturalist Alfred Russel Wallace discovered it on the tropical Indonesian island of Bacan. He described the female bee as “a large, black wasp-like insect, with immense jaws like a stag beetle”.

Despite its size, the bee remained elusive, with almost nothing known about the female’s secretive life cycle involving making nests of tree resin inside active arboreal termite mounds.

The bee was not seen again by scientists until 1981, when Adam Messer, an American entomologist, rediscovered it on three Indonesian islands. He observed how the bee used its giant mandibles to gather resin and wood for its termite-proof nests. 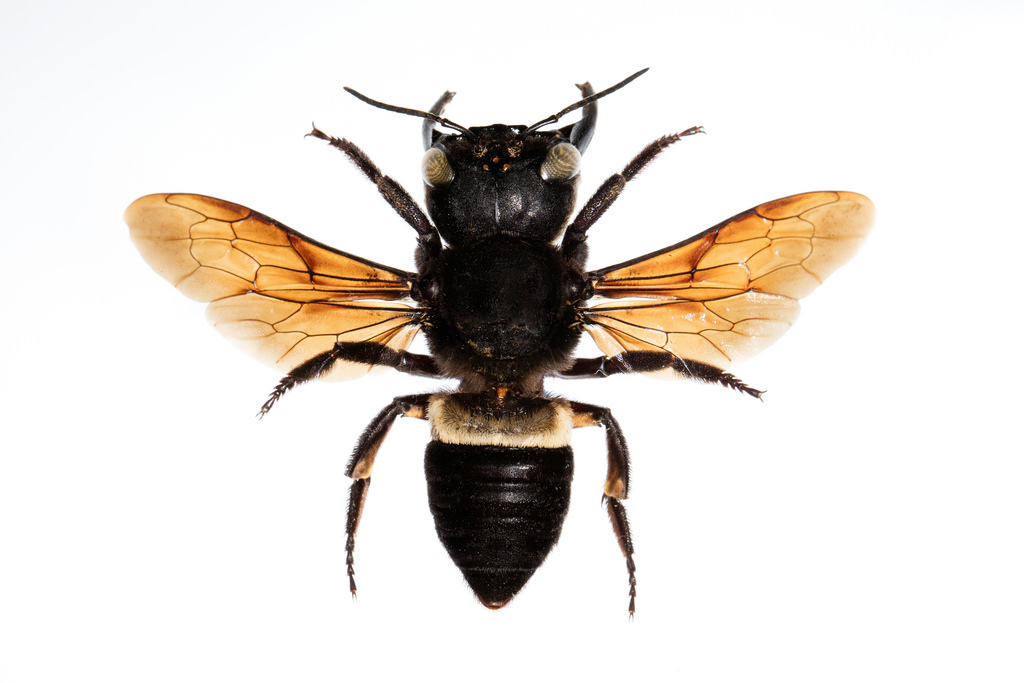 Search teams failed to find the bee again, but the rediscovery of a sole female raises hopes that the region’s forests still harbour this species.

The bee’s habitat is threatened by massive deforestation for agriculture in Indonesia, and its size and rarity make it a target for collectors. There is, at present, no legal protection concerning trading of Wallace’s giant bee.

Robin Moore, a conservation biologist with Global Wildlife Conservation, which runs a programme called The Search for Lost Species, said: “We know that putting the news out about this rediscovery could seem like a big risk given the demand, but the reality is that unscrupulous collectors already know that the bee is out there.”

Moore said it was vital that conservationists made the Indonesian government aware of the bee and took steps to protect the species and its habitat. “By making the bee a world-famous flagship for conservation we are confident that the species has a brighter future than if we just let it quietly be collected into oblivion,” he said.