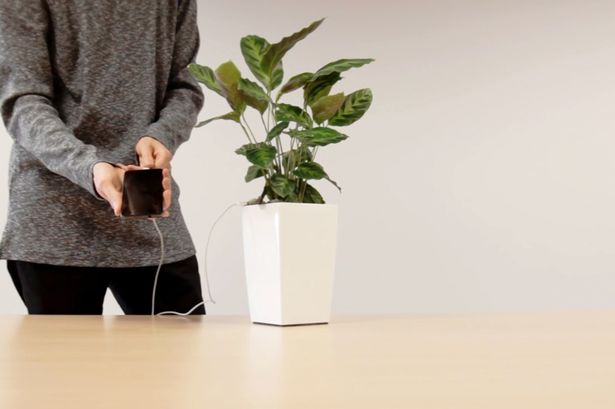 Think about it: USBs have completely changed the world. File sharing is so much easier and our data storing capabilities much better; we can fit huge amounts of information on these tiny little units and we can charge almost all of our electric devices with them, too. USBs are making our lives easier everywhere we turn and finding their way into many of our everyday items. Now, we may be also seeing them in our plant pots.

European start-up Arkyne Technologies is developing Bioo Lite — a little gizmo which, when placed within a plant pot, harnesses the power of photosynthesis to charge smart devices. The system generates electricity using only water, soil, and the energy of any common house plant. Various institutions have been working to develop similar technology for some time now, but this particular iteration is pretty awesome.

There are also a couple of other plant-powered devices out there already, like this one, but Bioo Lite has said one of their goals is to eventually turn forests into huge electricity generating compounds; imagine that!

What we’re looking at is nanotechnology. The technical details of Bioo Lite may seem a bit confusing, but let’s throw back to grade 5 science class for a second. Remember, photosynthesis is the process by which sunlight is used to turn CO2 and water into oxygen and organic compounds.

For this technology to work, cacteria in the pot break up the compounds, releasing electrons that travel along nanowires. The resulting electricity powers a typical USB port, in which you can plug your phone or tablet cable. The video suggest that the Bioo system generates energy by processing microorganisms expelled by the plant’s root system, and it does not impact the process of photosynthesis or the health of the plant itself, according to developers.

Arkyne Techologies claims one plant could charge up to 3 times a day. Because it generates power by collecting energy day and night, you can charge anytime you like, though the length of the charge will depend on your particular phone and battery life. They say charging with the plant is similar to charging your phone from a laptop, so I imagine it will be slower than plugging into a wall, but much, much, cooler.

But Does It Work?

I was reading through a lot of the comments people were writing about Bioo Lite and most people seem excited and impressed with this technology. But — and there’s always a but — some question the actual mechanics of the device, despite it apparently having some major backers. The output of 3.5 volts and 500 milliamps is actually a little less than many USB ports; however, certain plants will generate more of a charge and others less, according to Arkyne. Try plugging into a cactus and you won’t get very far.

I tried to contact them about 2 days ago and still have yet to hear back, but since they hit their crowd-fund campaign goal in just 10 days, with funds still rolling in, I’ll bet they’re pretty busy just now. They are letting people pre-order already and are hoping to roll the product out at the end of the year.

Bioo Lite works as long as the plant is alive, so as the plant thrives, so too will your phone’s battery. The implications of this are, in my opinion, pretty cool to consider — the idea of harnessing the power of mother nature to assist in everyday modern life just feels like the future, and one we can feel good about. The company also has scale-up technology to bring this same sort of concept to larger spaces.

Thanks to Collective Evolution for this post | featured image source