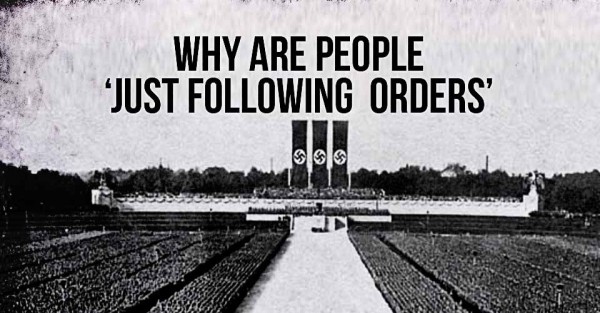 Why is it so easy to get people to do bad things? New research says people are easily convinced to do something when they feel less responsibility for their actions.
Buy an “Intelligence is sexy” t-shirt!

This research is comparable to the Milgram experiments of the 1960’s. If you need a refresher on what the Milgram experiments consisted of, as well as their findings, here is a rundown for you: Stanley Milgram was a psychologist at Yale University. He started conducting experiments in July of 1961 to find out how far people would go in obeying an instruction if it involved harming another person; he wanted to know how easily ordinary people could be influenced into committing atrocities. He examined the validity of the Nuremburg defense as it was based on “obedience”; those who used this defense were just following orders from their superiors. The experiment required a volunteer participant (referred to as the teacher), an authority figure, and someone placed by Milgram (the learner). The teacher was instructed by the authority figure to hit a switch that released a shock of electricity to the learner. The learner was not truly getting shocked, but would scream and cry out as if he were. The voltage gradually increased from 15V (slight shock), to 300V (dangerous), and finally to 450V (deadly). 65% (two-thirds) of participants continued to the highest level of 450 volts. All the participants continued to 300 volts.

What Milgram found was that ordinary people are likely to follow orders given by an authority figure, even to the extent of killing an innocent human being. But why do people follow orders to that point? What happens in our brain that makes those decisions take place?
Researchers: Watch Out for Overly Polite People

The recent study conducted by researchers at University College London and Université Libre de Bruxelles in Belgium might have found the answers to those questions.

“Maybe some basic feeling of responsibility really is reduced when we are coerced into doing something,” says Patrick Haggard of University College London. “People often claim reduced responsibility because they were ‘only obeying orders.’ But are they just saying that to avoid punishment, or do orders really change the basic experience of responsibility?”

Haggard and his team decided to start by measuring a responsive phenomenon called “sense of agency.” Sense of agency is basically a feeling that you are controlling your own actions, and therefore the events that follow. Like when you drop a glass and it breaks on the floor. Most people feel that they are in control of what they are doing the majority of the time: that is considered a normal sense of agency. In order for a society to connect and work together properly, sense of agency is needed because it is central to the idea of taking responsibility for our own actions.

Also, when someone voluntarily makes a decision, they experience an increased sense of agency which affects their perception of time. In other words, when you make the choice to flip a light switch and the light comes on, you perceive that action and reaction as almost simultaneous. If the same light switch were connected to an electrode that delivered a shock to someone, and you were ordered to flip it on, you would perceive a longer lapse in time for that action and reaction.
There Are Only 5 Types Of People In The World According To Psychologists. Which One Are You?

What Haggard and his colleagues found was that people feel a reduced sense of agency when their actions produce a negative effect versus a positive one. The researchers measured these changes of perception by having participants send a mild electric shock to another person, either by command or by their own choice. They also had other non-harmful tests where the participants caused the other person to experience financial loss instead of pain.

The participants made the decision to cause mild pain or financial loss either through coercion, or their own free will. To make the experiment a bit more fair, all the participants traded places with each other at some point. Those who delivered electric shocks or caused someone to lose money experienced the same treatment during other trials.

Haggard and his team reported that being coerced or commanded to preform a harmful task causes a small but significant increase in the perceived amount of time between action and outcome. It also seems that coercion changes how the brain processes the outcomes of our actions. Normally, when we make a choice to do something, we already understand the outcome that might take place and we accept responsibility for that. All of this takes place through synaptic response in our brain in an almost instant time frame. But when you have someone coerce or order you to do something, even if you have already experienced the thing you are about to do, the time frame feels like it takes longer. This occurs because being coerced or commanded to do something alleviates responsibility and it is that alleviation which causes the perceived elongated time lapse.

“When you feel a sense of agency—you feel responsible for an outcome—you get changes in experience of time where what you do and the outcome you produce seem closer together,” Haggard says.

So, why is it so easy to get people to do bad things? It boils down to a shift in responsibility. If you believe you are responsible for a harmful action, you might be less-inclined to follow an order that causes you to harm another person.
4 Proven Methods to Increase Your Influence Over People

Because we are programmed to accept authority figures as upstanding members of society, we follow orders. We were raised that way. Listen to your teacher, respect the police, obey your parents etc. But, when someone of authority orders you to do something you normally wouldn’t do, it seems a part of the brain is rewired. When sense of agency is decreased, signals are sent, and the angular gyrus is activated. This activation might be what alters our perception of time, combined with reduced feelings of responsibility.

Despite the obvious implications of these findings, not accepting responsibility for an action is not an excuse to blindly follow orders.

Haggard says, “Fortunately for society, there have always been some people who stand up to coercion.”

Do you think you would respond the same way the participants in this study did? Could you be so easily motivated to do something harmful to another person? This would make an interesting conversation and I’d love to see what you guys have to say in the comments!

Thanks to Iheartintelligence.com for this article and featured image