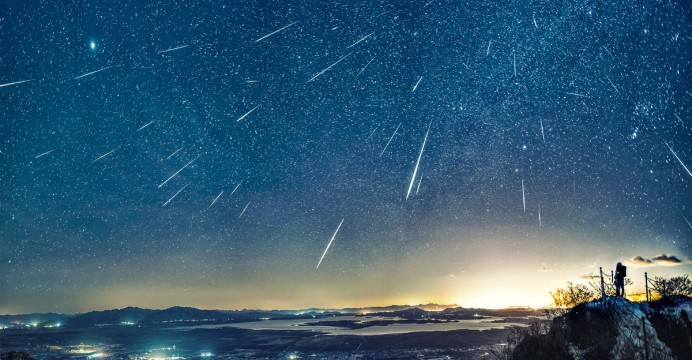 The annual Lyrid meteor shower is starting! It’s active each year from about April 16 to 25. In 2018, the peak of this shower – which tends to come in a burst and usually lasts for less than a day – is expected to fall on the morning of April 22, with little or no interference from the waxing moon.

This is one of the oldest recorded meteor showers in our history, dating back approximately 2700 years and is the Earth passing through the break up and trail of the Comet Thatcher. This Comet is incredibly slow, taking 415 years to orbit the Sun!

No matter where you are on Earth, expect the greatest number of meteors to fall during the few hours before dawn.

All in all the Lyrid meteor shower prospects look pretty good for 2018, though meteor showers are notorious for being fickle and not totally predictable.

Where will it occur?

Radiant is the point in the sky from where the meteors seem to originate or start. The Lyrid meteor showers Radiant point is located in the constellation called Lyra.

It will be towards the northeast of the brightest star of the current season, Vega. Take this as the reference point for your observation, but keep a look throughout if you want to catch some long tailed beauties. Around the Lyrids’ peak, the star Vega rises above your local horizon – in the northeast – around 9 to 10 p.m. local time (that’s the time on your clock, from Northern Hemisphere locations). It climbs upward through the night. By midnight, Vega is high enough in the sky that meteors radiating from her direction streak across your sky.

Just before dawn, Vega and the radiant point shine high overhead. That’s one reason the meteors are always more numerous before dawn.

Lyrid Meteor shower is one amongst the many meteor showers we witness throughout the year, but this one is set to be the most spectacular thanks to the moon being out of the way.

The Lyrid meteors are parts of the trail of Thatcher, whose orbit around the sun is of a 415 year long span. When earth crosses the path the comet took, we collide with the crumbs that it left in its wake; which we call meteors.

Lyra, is an magical instrument crafted by Hermes (Mercury) himself and gave it to his brother, God of Sun, Arts and Witchcraft Apollo. The Music Played by this instrument was so divine that all creatures would be mesmerized.

The Stars coming from Lyra, are believed to possess magical purposes. Star Witches love the Lyrid Meteor Shower as it bring out all the magical powers associated with Apollo, God of Magical Arts.

Star Magic has always been considered powerful and it dates back to the ancient Egypt and Mesopotamia. In fact, Star Magic is considered one of the oldest and most powerful forms of Magic. A Star Magician taps into the powers of the Stars in order to collect and direct the energy of the Stars. And Lyrid Meteor Shower is a favorite event for Star Magicians.

I think we’ll feel waves of energy during this time. Our emotions or energy levels may fluctuate throughout the period 16-25 April with the peak being felt 21-23 April 2018, particularly for those with an affinity or energetic connection to ‘the stars’.

For those who use crystals, this is a great time to pop any Moldavite or tektites on the windowsill or even better, outside in the garden close to the earth or nestled in amongst some grass. This raises their energetic vibration and they seem to like it a lot.