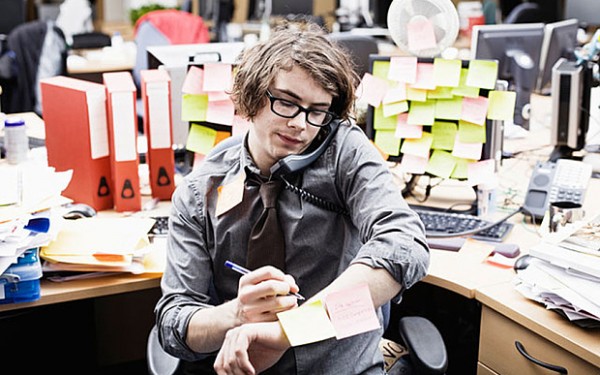 “If a cluttered desk is a sign of a cluttered mind, of what, then, is an empty desk a sign?” -Albert Einstein
Are you the slightly disorganised type? You might not be ready to call yourself a full-on mess, but the lack of order in your life may be the result of your completely scatterbrained state of being. You are not alone, there are loads of us out there, myself included.Over the years, scientists have attempted to capture the personality of creative people. But it hasn’t been easy putting them under the microscope. As psychologist Mihaly Csikszentmihalyi, who has interviewed creative people across various fields points out, creative people “show tendencies of thought and action that in most people are segregated. They contain contradictory extremes; instead of being an “individual,” each of them is a “multitude.”University of Minnesota recently conducted a research and they concluded results like this, “Scientists from the University of Minnesota found that being surrounded by clutter can promote creative thinking and stimulate new ideas. Messy people are also more likely to break with convention and try new things but aren’t as generous as people in tidy environments”, see their full article here.

Do you clean up regularly only to find it only stays straight for about a day, if that, as you rush about, being busy doing this and that? I am never bored and after a long day I am simply not going to spend several hours cleaning and tidying the house, I’m in bed dreaming of the mess I can create tomorrow.

Ok, so things may get misplaced from time to time, but it’s never detrimental to your overall life. You are aware that your mind is everywhere, but it just sort of works for you.

Well, according to Eric Barker for Time Magazine, these scatterbrained tendencies of yours may actually determine how smart you are. Barker presents a theory that says messiness is an indicator of intelligence.

Citing Steven Johnson’s book “Where Good Ideas Come From: The Natural History Of Innovation,” the basis of the theory hinges on the idea that the busier and more cluttered the brain will lead to more potential breakthroughs and ideas.

According to Barker, this is because higher volumes of “ideas bouncing about” in those more crowded cities and metropolises lead to a general increase in innovation.

So you can compare your brain to a crowded city or which is more innovative than a more sparsely populated village, though cowed your mind may be more prone to those kinds of innovative thoughts.

Additionally, Johnson says that engaging in multiple hobbies, like many scatterbrained people do, keeps your brain working at peak efficiency.

He explains how working on a variety of different projects at once can provoke new, more abstract styles of thought and reasoning.

Multitasking forces you to shuffle between thought processes and encourages your brain to “approach intellectual roadblocks from new angles or to borrow tools from one discipline to solve problems in another.” Instead of just zoning into one specific way of thinking.

At the end of the day, you want your thoughts to jumble around with each other. It may sound counterintuitive, but you want your ideas to “fight,” as Barker puts it.

Sounds hopeful? Lets look at it from a different angle, I know you like to do that…

On his own personal blog, Barker references the work of Jonah Lehrer, who argues in his book “Imagine: How Creativity Works” that this so-called debating of ideas is what leads to productivity.

He writes “debate and criticism do not inhibit ideas but, rather, stimulate them relative to every other condition.” This could be a provocative finding in regard to people who are disorganized.

People often argue that the clutter of items on someone’s desk or the floor of his or her room may prevent that person from thinking clearly, Lehrer seems to think such clutter could stimulate a person creatively.

I have always been criticised by my peers about the jumble of visual ideas that surround my work space. I argue that it allows me to float off into other aspects of the thought process, and admittedly complicated things might not get done immediately, they always get completed in time and with much richer outcomes.

It’s as if disorganised people are trained to thrive in chaos, and if they harness those qualities productively all sorts of amazing things can start to happen.

I think a level of disorganisation can help you to be flexible when obstacles arise and keep you on your toes when you need to approach situations differently, not much can sway you and in the surprises and disorderliness of life you can remain calm and focussed on your objectives.

So don’t feel embarrassed or cowed anymore when people criticise your work or living space, if you are still creative and efficient in your life, celebrate it, as it might be the secret to your success.

Thanks to Thinking Humanity for this article | Featured image source