In 1991 two men by the name of Doug Bower and Dave Chorley rocked the worlds of ufologists and paranormal experts alike when they claimed to be the driving force behind the crop circle phenomenon of the late 1970s and beyond using little more than a plank of wood and a length of rope. This was a claim self-professed experts on the phenomenon dismissed as ludicrous, until the two men showed everyone how they did it.

Flanked by members of the press from across the world, in a small field in Warminster, the two men proceeded to methodically push over wheat using wood planks. A few hours later, they stood in the middle of a crop circle so perfect actual aliens armed with a Spirograph would have struggled to make one that looked any better. The men then explained to the waiting cameras that they’d been making crop circles this way for well over a decade, starting in 1976, shortly before similar looking crop circles suddenly started cropping up in other areas of the world.

According to Chorley and Bower, the decision to first start flattening wheat in 1976 was inspired by two things- a story Bower had heard while living in Australia about mysterious circles appearing in sugarcane fields, and a few too many pints of beer. In regards to the former, Bower was referring to a series of large circular patterns that appeared in fields in Tully, Queensland in the mid to late 1960s. Unlike modern crop circles which often feature amazingly complex patterns and uniform pressing of crops, the Tully Saucer Nests were simple, somewhat crude circles of destruction. Ufologists have long maintained that these circles were caused by UFO’s landing and subsequently taking off, hence the name “Tully Saucer Nests”. The more accepted alternate theory is that they were simply caused by whirlwinds touching down briefly.

Whatever the case, after Bower moved back to England, the two men became friends over a mutual appreciation of art and their favourite hobby- watercolor painting. They eventually began a weekly tradition of meeting for a few drinks on a Friday evening at the Percy Hobbs pub in nearby Winchester. One day in 1976, they decided to have their usual drinks outside and noticed the acres of pristine wheat surrounding them, which is when Bower recalled the story he’d once told Chorley of the mysterious circles that had baffled experts in Australia. With a glint in his eye, Bower turned to his friend and said, “How would you like a bit of a laugh?” 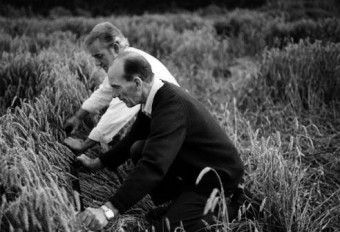 That night the men, using nothing more than a five foot iron bar Bower used to secure the door to his picture-framing store, created a huge circle in the middle of the wheat. Over the next two years, the men continued to create large circles in wheat fields, mostly around the area of Warminster in Wiltshire, because it was, according to Bower, a “well known centre for UFO sightings”, mostly limited to mysterious lights in the sky.

After two years of creating crop circles with little to no interest from either the public or the press, Chorley expressed the desire to throw in the towel (this activity being quite time consuming and physically intensive for a pair of elderly gentlemen). After contemplating the problem, Bower theorised “for people to really take note of our circles we needed a site with a viewpoint, so people could sit having picnics and look down in wonder on our work.”

In early 1978, Bower noticed that they were planting a new wheat crop in an area known as Cheesefoot Head, which was located in a well-known beauty spot popular with tourists. That summer, when the wheat was sufficiently grown, the men came and made an 80 foot wide crop circle. 24 hours later, it was national news.

Almost immediately after the circles came to public attention, numerous “experts” began to come forward with varying explanations about their cause, attributing them variously to aliens, ghosts, supernatural entities, spirits angry with humanity about global warming, and even God. This amused Bower and Chorley to no end, with Chorley later remarking, “They called us ‘superior intelligence’ and this was the biggest laugh of all.”

To further their little joke, the pair approached some of the self-professed experts saying that they were wildlife enthusiasts who often trudged around the region and they’d be happy to keep an eye out for any more crop circles. Under this guise, the men would go make a crop circle and then place a few phone calls the following day telling the experts that they’d “found another one” in an effort to keep the hoax alive.  Eventually, this became unnecessary as enthusiasts flocked to the region.

In addition to stringing along the host of pseudo-scientists who became fascinated with the crop circle phenomenon, Bower and Chorley also took note of what real scientists were saying about them and adjusted their designs accordingly. For example, when meteorologists, who were specifically trying to debunk the same ufologists and pseudo-scientists Bower and Chorley were encouraging, suggested that because all the crop circles up to that point had been, well circles, they were likely caused by “downward-spiralling winds”, they began creating crop circles featuring a variety of geometric shapes. 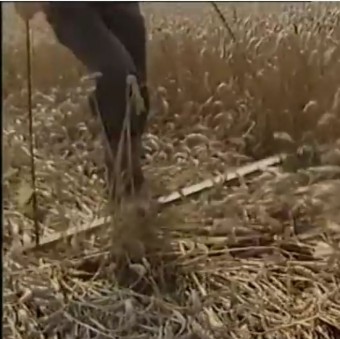 Though the designs of the crop circles became ever more elaborate, the materials Bower and Chorley used didn’t change much over the years. It was noted that the most sophisticated piece of equipment used by either man was a sighting device made from a loop of wire hung through the visor of a baseball cap such that it dangled in front of the left eye, allowing them to check if the lines they were making were straight. Other than this, their standard equipment was a plank of wood with some rope threaded through each end so they didn’t have to bend over to pick it up. The designs for individual crop circles were usually drafted by Bower in his workshop.

In 1985, about a decade after the two men first started creating crop circles, Bower’s wife became convinced that he was up to something when she noticed that their car’s odometer was unusually high- far more so than could have been explained by simply heading off to the pub with Chorley every Friday night. When Bower confessed that they’d been traipsing around the countryside flattening wheat, she didn’t believe him. To prove that he wasn’t lying, Bower asked his wife to design her own crop circle, which he then dutifully went and created in a nearby field for her. With his wife’s blessing, Bower and Chorley continued making crop circles for six more years until they both decided it was time to come clean.

This brings us back to 1991. Despite the evidence, including among other things detailed designs of every crop circle they’d created over the years (over 200 in all), many didn’t believe them. Those who’d made a career talking about crop circles and in some cases playing up the phenomenon to tourists (still a staple industry today in this region, which is largely why the farmers put up with it) flatly refused to believe that the two were telling the truth. Cereologists (the name crop circle experts refer to themselves as) cited the fact that other crop circles had appeared in other parts of the world that neither Bower or Chorley could possibly take credit for. One cereologist, Pat Delgado, was quoted by the New York Times as derisively saying: “Yesterday there were circles discovered on a prairie in Canada. Have these guys been out there with their board?”

Of course, the less tinfoil-hat explanation for the other crop circles is simply that Bower and Chorley’s crop circles inspired other, like-minded pranksters, which is why they have appeared in places neither man visited after the pair started their little prank; the circles are, after all, quite easy to create. On the other hand, perhaps the extraterrestrials or spirits simply have a sense of humor too, deciding to copy Chorley and Bower’s crop circle idea…

When asked about why they decided to dedicate such a significant portion of their lives to flattening wheat into visually pleasing patterns, in a 1999 article, Bower waxed poetic about the time he’d spent with his friend (who sadly died in 1997 after a battle with cancer):

It was just pure enjoyment, on those beautiful summer nights for two artistic people under the stars amid all those cornfields. We were both 19th Century people really. We were in another world.’I don’t consider being on a planet for 60 years is much use if you don’t leave your mark. We didn’t want to make publicity. We just wanted to make fools of the experts who were springing up everywhere. My wife said Dave and I were like chalk and cheese, but we were a team in tune with nature…

Other people made money out of the corn circles The experts, the farmers who charged entry, but all Dave and I got was a really big laugh. But its been a wonderful experience and I wouldn’t have missed it for the world.

As to whether Bower believes in extraterrestrials, he stated, “It’s obvious that in all those millions of planets we saw out there in the night sky, there must be people out there.”

If you liked this article, you might also enjoy subscribing to our new Daily Knowledge YouTube channel, as well as: