Bird spikes on buildings make sense. They prevent noise, mess, and the spread of lice and disease around human spaces – without harming the animals. But now one of the wealthiest suburbs in Bristol, England has caused an uproar by fixing bird spikes to a tree.

This, according to one resident, is to prevent the birds from pooping on expensive cars and ruining the paint, a move that has been called a “war on wildlife”.

The spikes were originally installed on Pembroke Road, Clifton in 2014, by the Hillcrest Estate Management of the Bartlett Court flats, to protect the cars of the “prestigious development” from roosting pigeons.

The installation is only now generating traction after a photo was shared on Twitter by Bristol resident Jennifer Garrett. At the time of writing, it has racked up nearly 6,000 retweets. 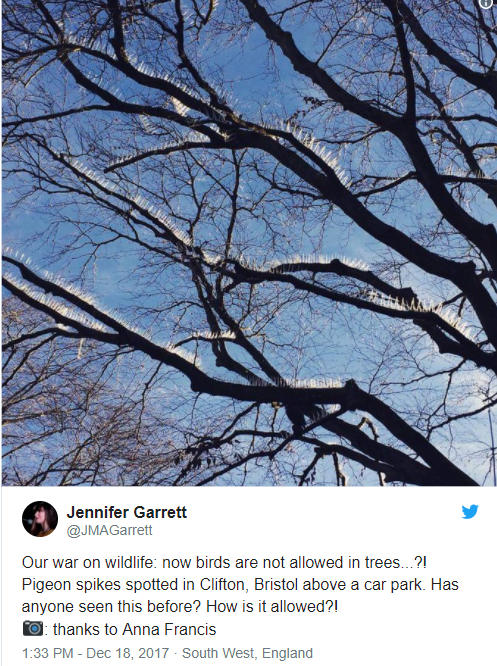 “I’m aware that the landowner might be legally within their rights to do this to the trees as they seem to be on private land,” local Green party councillor Paula O’Rourke told The Guardian.

“However, I will be looking into this at the council. Whether allowed or not though, it looks awful and it’s a shame to see trees being literally made uninhabitable to birds – presumably for the sake of car parking.

“Sometimes it’s too easy to lose sight of the benefit that we all gain from trees and green spaces and from the presence of wildlife around us in the city.”

The flats aren’t far from the wildlife-rich Avon Gorge, home to endangered peregrine falcons, which returned to the region after being driven away by human activities in the 1930s. They feed mainly on other birds – including pigeons.

According to residents, who did not wish to be named, other deterrents to keep not just pigeons but also squirrels out of the trees did not work. Fake birds of prey and noise deterrents were tried – and there are no car-washing facilities, one resident told the BBC.

Another told The Guardian, “the spikes are solely to protect the cars [parked under the trees]. There is a big problem with bird droppings around here. They can really make a mess of cars, and for some reason the birds do seem to congregate around this area.”

The Royal Society for the Protection of Birds does recommend bird spikes as a harmless and humane bird deterrent in urban situations, but a spokesperson spoke out against this particular application.

“The recent State of Nature report highlights that more than half of all wildlife in the UK has declined over the past 40 years,” said the RSPB’s Jeff Knot.

“Instead of looking at ways we can force nature into an ever smaller space, we should look at how we can live alongside wildlife and help give it a home in our villages, towns and cities.”

Bristol Council said that the trees are on private property, and therefore not subject to a tree protection order, and there was nothing the council could do.