Facebook Inc. will show people which Russian propaganda pages or accounts they’ve followed and liked on the social network, responding to a request from Congress to address manipulation and meddling during the 2016 presidential election.

The tool will appear by the end of the year in Facebook’s online support center, the company said in a blog post Wednesday. It will answer the user question, “How can I see if I’ve liked or followed a Facebook page or Instagram account created by the Internet Research Agency?” That’s the Russian firm that created thousands of incendiary posts from fake accounts posing as U.S. citizens. People will see a list of the accounts they followed, if any, from January 2015 through August 2017.

It’s Facebook’s most direct effort to explain to users how they may have been affected by the IRA’s postings, which reached an estimated 150 million people and stirred up controversy over gun rights, immigration, race relations and religion in the U.S., sometimes prompting real-world protests on both sides of a debate.

“It is important that people understand how foreign actors tried to sow division and mistrust using Facebook before and after the 2016 US election,” the company said in the post.

Example of what’s to come: 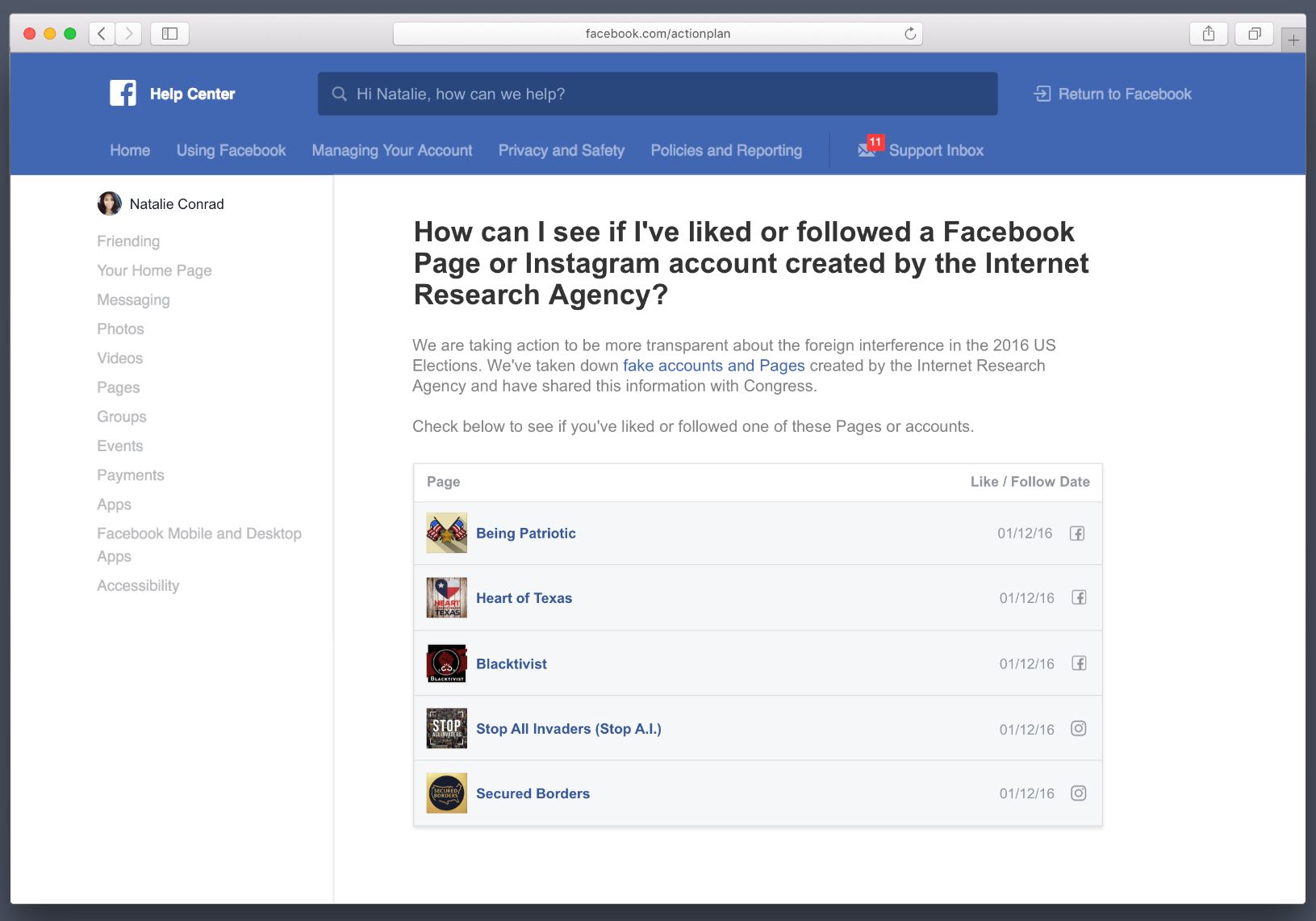 Facebook, Alphabet Inc.’s Google and Twitter Inc. appeared in early November for hours of congressional testimony to explain how Russia used the platforms to manipulate U.S. citizens. The companies vowed to do more to prevent anything similar from occurring in the future, and said they would look into the possibility of informing users about their exposure.

“I hope that Google and Twitter will follow Facebook’s lead,” said U.S. Senator Richard Blumenthal, a Democrat from Connecticut and a member of the Senate Judiciary Committee. Those companies have not responded to a similar request, according to Blumenthal’s office.

“We look forward to additional steps by the companies to improve transparency with respect to Russian abuse of their platforms,” Schiff said in a statement.

Facebook will only be showing people the names of the pages and accounts, not the content. A user will only see what they liked or followed, so if they simply saw IRA content in their news feeds, they won’t be notified.

It’s “much more challenging” to reliably tell people if they were exposed on an individual basis, Facebook General Counsel Colin Stretch told Congress earlier this month. When people like or comment on a post, that post is eligible to show up in any of their friends’ news feeds — helping the content go viral. Facebook argued it couldn’t say for certain who paid attention to what content. That position fell flat when senators noted that Facebook’s business model is based on the targeting and tracking of ads.