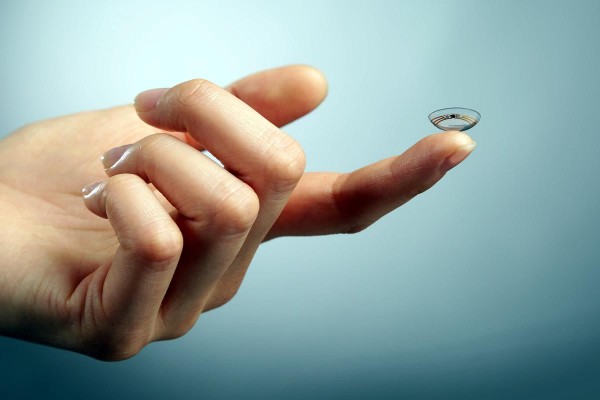 A polymer film coating with the ability to turn contact lenses into computer screens is set to transform the wearable visual aids into the next generation of consumer electronics.

Scientists from the University of South Australia’s Future Industries Institute have successfully completed “proof of concept” research on a polymer film coating that conducts electricity on a contact lens, with the potential to build miniature electrical circuits that are safe to be worn by a person.
UniSA researcher from the FII, Associate Professor Drew Evans said the technology was a “game changer” and could provide one of the safest methods to bring people and their smart devices closer together.
“We’re talking about anything from a simple sensor that can measure the amount of glucose in your blood through to actually creating electronic displays so rather than having something like a pair of glasses that’s acting like a computer, you can actually generate images directly on your contact lens,” Assoc Prof Evans said.
“We have always known that our film coating technologies had potential for many applications and now we have taken that a step further by proving that we can make biocompatible, conducting polymers at the nanoscale and grow them directly on a contact lens.”
University of South Australia polymer coating research is a game changer for hi-tech contact lens industry.
The University of South Australia’s Future Industries Institute focuses on building knowledge and capacity in core future industries through national and global research partnerships.
The FII has partnered with a world leader in contact lens development from the United Kingdom in the project.
Assoc Prof Evans said the breakthrough had been two years in the making but had stemmed from a decade’s worth of fundamental research.
“The sky’s the limit and the work we’re doing with our industry partner aims to give them a game changing technology,” he said.
“Obviously the timeframe to go from where we are now to each of these different applications is unknown but it’s the first step towards being able to do a lot of that.
“We’ve proven that these materials go together and the next phase of the project is to make them stick and make them robust.
“Once we achieve that step the next step would be to scale up the manufacturing process and work with the team in the UK to develop a commercial product.
“If we can demonstrate that we can get it to stick then that is the game changer and the world is our oyster.”
Other FII achievements with the thin film coatings include the development of the world’s first fully plastic car mirrors and electrochromic windows, or smart windows.
“These are the windows that with the flick of a switch will darken and then you can flick them back to transparent to control the amount of light that comes in and out,” Assoc Prof Evans said.
“We’ve also modified those polymers for use in camouflage for military and there’s a large research activity around how they can be used in new types of batteries.
“The excitement from the industry point of view is that this opens up a range of new opportunities for their businesses.
“The next big leap is to develop complementary technologies to read the information transmitted by the conducting polymers.
“What is really significant is that the materials we are developing are not only safe but also have the potential for a range of personalised health monitoring applications that could make life simpler for people struggling with chronic health problems.”
The complete proof of concept research results have recently been published in ACS Applied Materials and Interfaces.
Explore further: Breakthrough in augmented reality contact lens: Curved LCD display holds widespread potential
More information: Thierry Moser et al. Hydrophilic Organic Electrodes on Flexible Hydrogels, ACS Applied Materials & Interfaces (2016). DOI: 10.1021/acsami.5b10831
Journal reference: ACS Applied Materials and Interfaces

Thanks to Phys.org for this post | featured image source