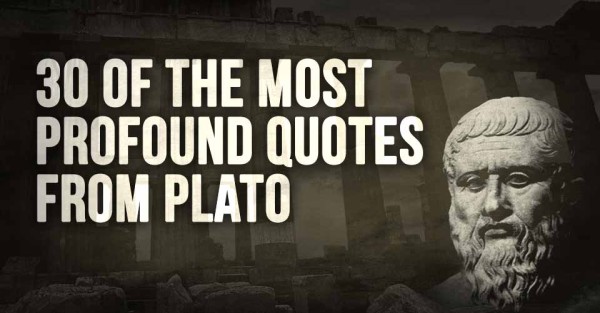 In history, there have been fewer minds more brilliant than that of the Greek philosopher, Plato. I mean, consider a man who was the student of Socrates and the teacher to Aristotle. Plato is one of the founding fathers of what we know to be Western Philosophy. The contributions that Plato has made on the minds of anyone who has studied him are truly timeless in nature. Here is a collection of 30 of his greatest quotes:

“Be kind, for everyone you meet is fighting a harder battle.”

“Courage is knowing what not to fear.”

“Every heart sings a song, incomplete, until another heart whispers back. Those who wish to sing always find a song. At the touch of a lover, everyone becomes a poet.”

“Only the dead have seen the end of war.”

“The price good men pay for indifference to public affairs is to be ruled by evil men.”

“Do not train a child to learn by force or harshness; but direct them to it by what amuses their minds, so that you may be better able to discover with accuracy the peculiar bent of the genius of each.”

“The heaviest penalty for declining to rule is to be ruled by someone inferior to yourself.”

“According to Greek mythology, humans were originally created with four arms, four legs and a head with two faces. Fearing their power, Zeus split them into two separate parts, condemning them to spend their lives in search of their other halves.”

“Love is a serious mental disease.”

“One of the penalties of refusing to participate in politics is that you end up being governed by your inferiors.”

“good people do not need laws to tell them to act responsibly, while bad people will find a way around the laws”
Read: 30 of the Greatest Quotes from Abraham Lincoln about Life and Success

“I am the wisest man alive, for I know one thing, and that is that I know nothing.”

“There is truth in wine and children”

“Ignorance, the root and stem of every evil.”

“I’m trying to think, don’t confuse me with facts.”

“If women are expected to do the same work as men, we must teach them the same things.”

“…and when one of them meets the other half, the actual half of himself, whether he be a lover of youth or a lover of another sort, the pair are lost in an amazement of love and friendship and intimacy and one will not be out of the other’s sight, as I may say, even for a moment…”

“The measure of a man is what he does with power.”

“Those who tell the stories rule society.”

“The madness of love is the greatest of heaven’s blessings”

“There are three classes of men; lovers of wisdom, lovers of honor, and lovers of gain.”

“Education is teaching our children to desire the right things.”

“When men speak ill of thee, live so as nobody may believe them.”
Read: 60 Timeless Inspirational Quotes

“In politics we presume that everyone who knows how to get votes knows how to administer a city or a state. When we are ill… we do not ask for the handsomest physician, or the most eloquent one.”

“How can you prove whether at this moment we are sleeping, and all our thoughts are a dream; or whether we are awake, and talking to one another in the waking state? ”

Thanks to IHeartIntelligence for this article and featured image