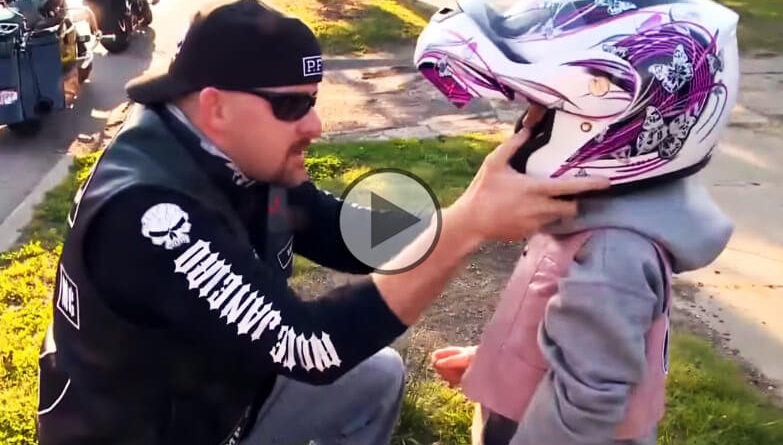 A seven-year-old girl who has been the victim of a neighborhood bully for more than a year has received support from a very special group of bikers, who found out about her plight via Facebook. Now, they are out to stop bullying once and for all. You are going to love this story when you watch the video.

Little Ashley has been tormented by a neighborhood bully for almost a year. He has repeatedly knocked her around, called her bad names, and even beat her up, sending the seven-year-old girl to the emergency room, and him into police custody.

Well, Ashley’s mother has had enough of this and put together a Facebook page to draw attention to her daughter’s situation.

And attention it has received. Upon reading the post, a member of a local biker club reposted it so that all his brothers and sisters of the road would know about the situation. In the blink of an eye, Biker clubs all over came together to help this little girl and her family end bullying.

They arranged a special rally for Ashley and her family at a local park, revving their engines and even letting the seven year old ride on a Harley Davidson. Then they took the rawcus party back to Ashley’s neighborhood, where they made a stand within spitting distance of the eleven year old offender’s house, just so that he could get the picture loud and clear that bullying will not be tolerated anymore.

Local biker James Dingman said of the event “We got word from other brothers at other clubs and we all met. I don’t believe in bullying. Nobody should be bullied.  We wanted a show of force, that she is loved and she’s got people out here that care for her.”

Another area biker, John Spencer shared the event on his Facebook page at the end of the day, saying “We made a difference tonight and helped in the widespread fight against bullying, particularly with a very serious case with a wonderful little 7 year old girl named Ashley, who has had a terrible bully in her neighborhood for quite some time now and has been terrified to play outside her own home after being sent to the E.R. and continuously threatened and hurt.”

These guys may be loud, they may be covered in hair, and tattoos, and motor oil, and they may listen to way too much Lynyrd Skynyrd, but deep down they prove time and again that they are the rebels with hearts of gold and the bravery to stand up for what is right.

Whether it is coming together to show solidarity for victims of bullying, or to raise money for charitable causes, biker clubs across our nation represent the best of the American spirit: wild and free, but strong and compassionate.
Do you like to ride motorcycles? What do you think should be done to end bullying once and for all? Please share your thoughts and ideas with us here.