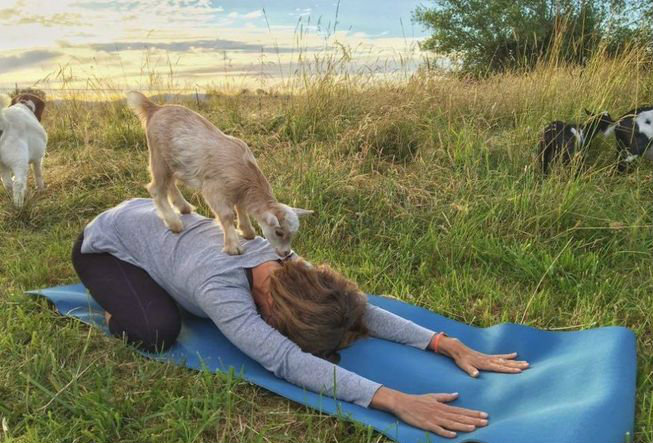 Imagine being stretched out on your yoga mat, slowly relaxing into a pose when a baby goat ambles over and hops up on your back. Another one nudges your water bottle, nibbles on the corner of your mat, and then decides to curl up in the crook of your legs to take a nap.

Is there any better way to de-stress?

Lainey Morse, owner of No Regrets Farm in the Willamette Valley of Oregon, thinks she found a pretty perfect therapy. Her sweet, incredibly social Nigerian dwarf goats wander around, sometimes participating and sometimes napping, as people take part in what she calls “goat yoga.”

Morse started the classes in the summer of 2016. She was having a child’s birthday party at her farm when one of the mothers stood out in a field with the goats milling around and told her it would be the ideal spot to hold a yoga class. Word spread on Morse’s popular “Your Daily Goat” Facebook page — which she started to protect her friends from an onslaught of adorable baby goat pictures. Classes sold out immediately and goat yoga now has a 1,000-person waiting list.

“Right now, everything is so stressed out in the world and people are so angry and it just gives people a smile,” Morse says, trying to explain the popularity of the class. “I’m just happy my goats are making people happy.”

All of the people who have taken to the class have come from far away, says Morse.

“People are desperate for something that’s happy. Everyone that comes here to the classes drives 100 miles, 300 miles, or flies in. They all live in big cities,” she says. “They just want to get away from the stress.”

When she started the idea, Morse says she was dealing with health issues and realized that the goats helped her deal with her own negative feelings. Now, in addition to the classes, she’s using the goats as therapy animals. She holds “Goat Happy Hour” where people spend time with the goats to relax and de-stress (no alcohol necessarily involved).

“I’m hoping that I can be this trailblazer that starts using goats around the country for animal-assisted therapy,” Morse says. “It helps me and I’ve seen it help so many people who come through my farm.”

You have to stop occasionally to pet the goats. (Photo: Goat Yoga)

Through the first summer and fall, a yoga instructor held the classes in a field at Morse’s farm. She held a holiday class in the barn when temperatures dipped below freezing, but that didn’t keep goat-loving yoga fans from braving the temperatures.

Six of Morse’s eight Nigerian goats are rescues, and she has since also adopted a handful of larger Boer goats that were headed toward slaughter.

This little goat is only trying to help. (Photo: Goat Yoga)

Now, Morse has a mobile van so she can take the goats to various locations throughout the area. She’s also had inquiries from all over the country, as well as in Canada and the U.K., from people who want to franchise the concept and bring goat yoga to people all over the world.

“It’s really hard to be sad and depressed when you have baby goats running around you. I’ve had people come who have had stage four cancer and cry through the whole class and it made their head feel better than anything else they’ve tried,” Morse says. “The name might sound silly, but it seems to be helping.”

It’s hard to do yoga when there are baby goats to cuddle. (Photo: Goat Yoga)

Here’s a video where you can watch the goats at work.

Mary Jo DiLonardo Mary Jo writes about everything from health to parenting — and anything that helps explain why her dog does what he does.