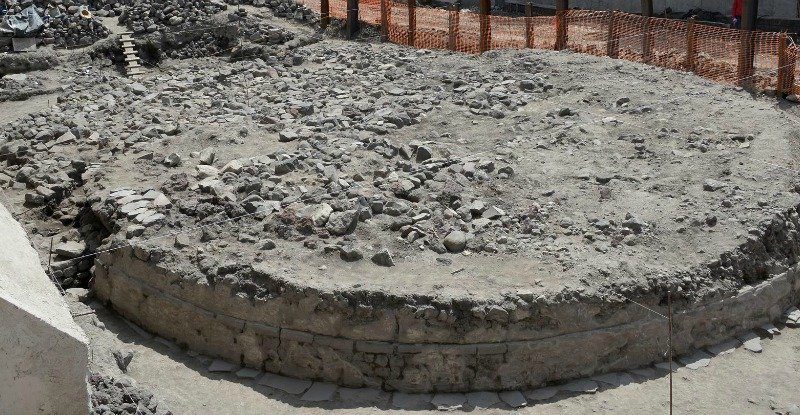 Back in 2014, a supermarket was demolished in Mexico City to make way for a new mall, revealing what appeared to be a mysterious structure underneath it.

Now, two years later, a team of local archaeologists have found that the structure is actually a 650-year-old platform, measuring 1.2 metres (4 feet) tall and 11 metres (36 feet) across, and they say it was likely part of an ancient temple used to worship Ehecatl-Quetzalcoatl, the Aztec wind god.

According to the team, the site was once part of a sacred Aztec city-state known as Tlatelolco. That name that is now infamous because of a 1968 massacre that happened there, where a group of protesting students were killed by Mexican soldiers.

Before those tragic modern events, Tlatelolco – now a small section in the northern part of Mexico City – was a thriving city for the Aztecs, and the recent discovery of the wind god temple is just one out of 43,000 other archaeological finds in the area.

The temple was found 3 metres (10 feet) beneath the old supermarket, and once the team started digging further, they found even more artefacts surrounding the stone structure.

The team, led by director of the archaeological area of Tlatelolco, Edwina Villegas Gómez, and Mexico’s National Institute of Anthropology and History, found a bunch of strange things around the platform, which might have been used to submit offerings to the ancient god.

As Rossella Lorenzi reports Seeker, among these finds were simple items like cactus thorns, incense burners, and pottery, but there were also more gruesome finds as well, such as the remains of a newborn baby – with no signs of foul play – and the skull of an adult male with a ring next to it.

In total, the researchers say they’ve found eight complete skeletons, including six infants, an adult male, and an adult female at the site.

While finds like these are not uncommon, the platform and ritual site will likely provide more clues as to how the ancient Aztecs worshipped their gods and how the city of Tlatelolco became a spiritual capital in the process.

Based on the artefacts found so far, the specific god worshipped at this temple might have been Ehecatl-Quetzalcoatl, the Aztec god of wind who appears like a feathered serpent.

Here’s an artist’s interpretation of what he was believed to look like: Right now, information about the Aztec city of Tlatelolco is rather hard to come by, because so much urban development has taken place in Mexico City, and many of the ancient sites have been covered.

So finds like this one, although still in the early stages, provide important insight into what life was like for the society.

As construction sites pop up all over the place, more clues will hopefully emerge around the city, providing the evidence researchers need to create a more complete picture.

The team’s work has yet to be published, though the dig is still underway, which means we’ll likely see the full results once all of the artefacts have been analysed.

The researchers hope to have the site opened to the public in 2017, after they construct a small platform and viewing window to make the site visible from the streets around it.