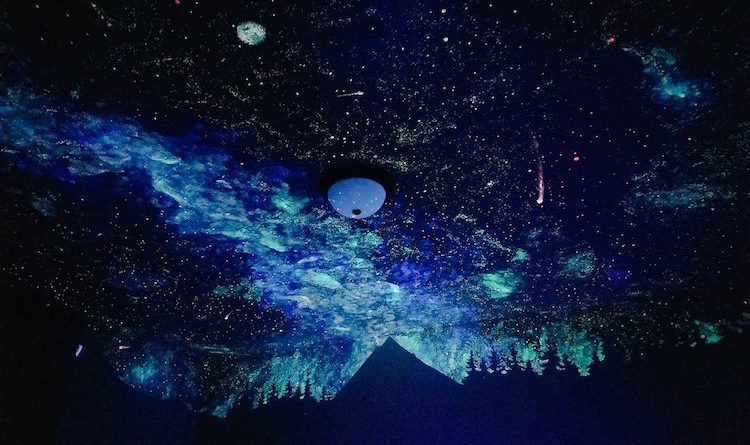 When Crispin Young Wilson‘s friend relayed that her 4-year-old son Benjamin was having trouble sleeping in his room, the server hardware repairer put her side hobby to good use. The Hood River, Oregon native spent the day painting a spectacular, glow-in-the-dark galaxy on the ceiling of Benjamin’s room. “[My friend] has a little boy who refused to sleep in his own room,” she shared. “When my friend got his new place, he wanted me to come over and paint the room, hoping it would entice his son to sleep in it.”

Using glow-in-the-dark paint and stencils, Wilson created a fantasy scene inspired by Mount Hood—Oregon’s highest peak. And this isn’t the first time Wilson has tried her hand at such work, which is invisible when the lights are on. “I’ve done this for myself in each place I have lived. The landlords either never knew, didn’t care, or new tenants liked it and didn’t complain,” she said.

While constant arm pain had slowed her down in recent years, successful surgery means that she’ll be able to continue on with her passion, which is especially fortunate after the attention Benjamin’s mural received. After tweeting her work, it went viral with more than 40,000 retweets. “After the profound shock of going viral wore off, I have been absolutely floored and humbled by the response,” Wilson admits, “and I have definitely happy cried a few times this week at how kind everyone has been. You all make me realize that this could be something I could do for a living full time, which is a dream come true.”

As for Benjamin, you can see his positive reaction below, which means mom and dad may have reclaimed their own bedroom.

With the lights on, the mural remains hidden—appearing once darkness overtakes the room.

Wilson prepared stencils ahead of time to create the silhouette of a forest against the night sky.

When Benjamin was prepared for bedtime, he had no idea what to expect.

Upon flicking off the lights, Benjamin paused and then exclaimed with joy “Daddy what is that?”

He kept running to turn the lights on and off, mesmerized by the magic he saw. Mission accomplished.

All images via Crispin Young Wilson.