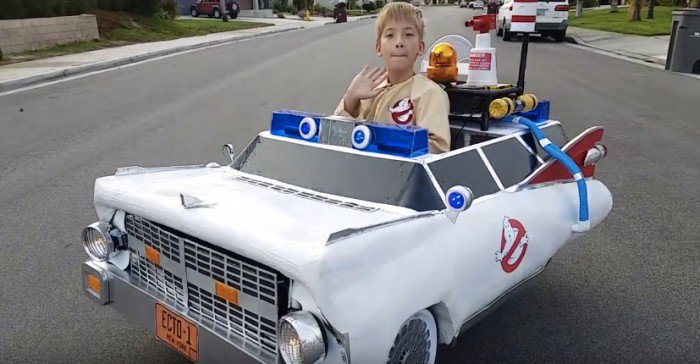 We think we’ve just found the father of the year.

Every Halloween, Ryan Scott Miller converts his son Jeremy’s wheelchair into an amazing mobile costume. This year, in an attempt to out-do last year’s epic Star Wars snowspeeder, the Millers left Jeremy’s costume up to a poll amongst friends between four family-approved suggestions.

They chose the Ghostbusters Ecto-1.

“He’s seen all three [Ghostbusters] shows and watches the cartoons on Netflix,” Miller told Mashable, “He loves the music, he loves that it’s a comedy with some pretty cool gadgets and adventure.”

Of all of Jeremy’s costumes, “This has been the most complicated and difficult build,” Miller wrote, “The frame was more complex, [and] there was a lot of detail,” he continued.

“Seeing his face as it started to take shape [was] awesome,” he said.

And Jeremy isn’t the only one smiling at the amazing finished product.

“We’ve come to love the smiles we bring to kids and their parents as we’ve shared it,” Miller wrote, “So we decided to share the costume with the kids at some of the local Children’s Hospitals.”

It’s hard not to smile at this functional masterpiece.

We’re sure Jeremy will be spreading the joy all Halloween.