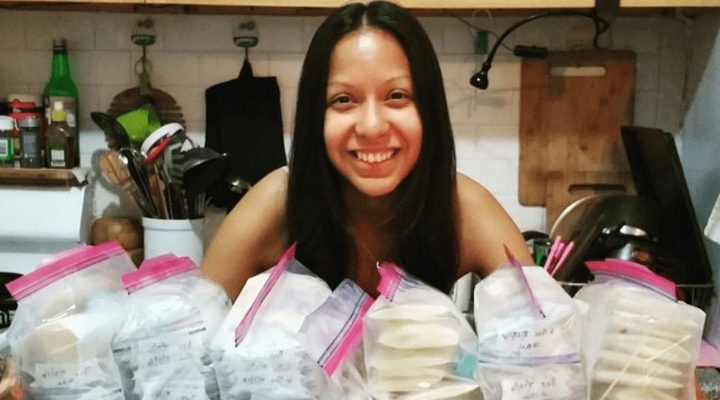 Wendy Cruz-Chan turned a personal tragedy into hope for other mothers and their babies. At 19 weeks, a rare uterus infection caused her son to be stillborn.

“I wanted to turn something tragic into something good. All I have of him are his ashes in his urn. I can’t dress him, I can’t play him, I can’t watch him grow. As a mother, it breaks me. It hurts me deeply,” she told InsideEdition.com.

Her milk ducts were already forming and her breasts engorged, and as she left the hospital she made the decision to donate her breast milk to children in need.

Donated milk often makes the difference between a very long and drawn out hospital stay or a quick recovery for newborns in Neonatal Intensive Care Units, usually by being used as a fortifier to add to the mother’s own milk. It can also be directed to a specific donor that may be in immediate need, and very local.

Like blood, there is constant need for a fresh supply, and the small window of opportunity that exists to even have the potential to be a donor makes it all the more difficult for hospitals and milk banks to find a steady supply for NICU wards.

“Even though I cannot personally breastfeed my own son, I wanted to do something in his name. That’s all I can do for him.” She connected with the doula (think childbirth coach and supporter on all physical and emotional levels) community online that she was a part of, and was able to help many children, one of which has Epidermolysis bullosa (EB), a rare skin disease that causes blisters on the skin.

Initially, she planned to pump for three months, but after reaching the 8-gallon marker at the end of her second month, she decided to double her goal in her third month.

While weaning her breasts off of milk production after hitting her goal, Cruz-Chan shared that she wants to help bring awareness to just how helpful breastmilk donations were and to try normalizing both discussion and donation among mothers.

“I’m just so proud of my boobs,” she said jokingly. At 16 gallons, she has every right to be.