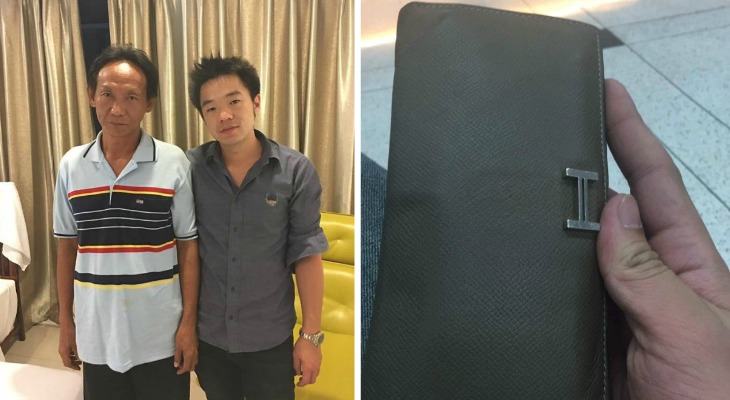 Even though he was without a home to sleep in, or food to eat, he found a wallet and turned it in. In exchange, the wallet’s owner gave him a job and a place to live.

A person’s true character is revealed when they have hit rock bottom, and run out of luck. Sometimes, that character shows someone who possesses integrity and honesty, as is the case with this 44 year-old man. Having only 9 baht, which equates to 25 cents USD, to his name, he still felt compelled to do what was right.

According to Metro, Waralop was sleeping at a subway station in Bangkok, Thailand, when he noticed the owner of the wallet, Niity Pongkriangyosacross, drop a designer Hermes wallet. Waralop tried to catch up to the man, but couldn’t reach him. Upon looking inside the wallet, he discovered that it held 20,000 baht ($579USD) and a number of credit cards inside.

Rather than do what most people in his situation would do, like purchase something to eat or get a place to sleep for the night, Waralop decided to turn the wallet in to the police. Reportedly, Nitty wasn’t even aware he had lost it.

At first, Nitty presented Waralop with a 2,000 baht ($57) reward, but thought better of it, and offered him a job instead.

“My first reaction was ‘wow’, if it was me in that position with no money I probably would have kept it.

But he was homeless and had just a few coins in his pocket and still handed it in. That shows a good, honest person. Just the kind of staff we need.”

Woralop’s new job comes with housing plus an 11,000 baht ($314) salary, and he is thrilled about this new opportunity in his life.

“I’m so grateful to be given this chance to turn my life around. Having a clean bed to sleep in makes me so happy now.”