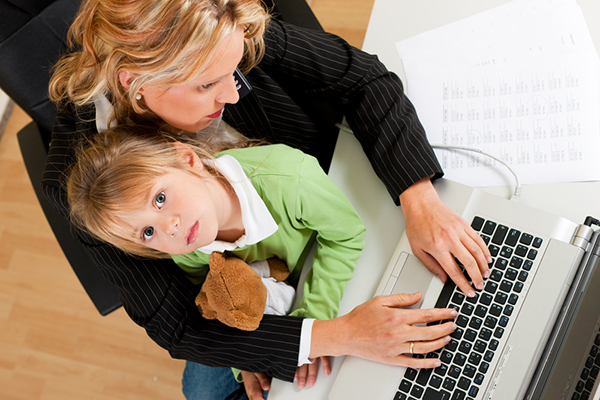 Rachelle, mother of two, is a mommy blogger, who shares her various experiences with her viewers. The 34-year-old woman has now started a new debate via her recent post that talks about working mums vs stay-at-home mums. The lady has experienced both situations and found neither one is easier.

Mum of two described that both of the situations are equally hectic and she constantly feels the pressure of getting things done.

‘It really just shows, unless you’re a high-flying millionaire like Kim K who gets paid just for living, both stay at home and working mum’s have it hard,’ Rachelle said. ‘Working part time really allows me to see both sides of the stay at home versus working mum debate, If anything it gives me a greater understanding that we all have it hard and feel pressure’ she added.

Rachelle works four days a week at the management firm. She wakes up at 5:15 a.m. and makes herself a whopping cup of coffee. After saying good morning to her hubby, she manages to dress herself up while making breakfast and getting her children ready alongside.

After dropping off her children at the childcare centre (meanwhile feeling guilty), she makes her way towards the office. Even during her work time, her mind is constantly occupied with the kids, house chores, and dinner. Rachelle admitted that she feels culpable for leaving her children at the daycare because they miss their mum.

While at home, Rachelle’s day starts off at 5:15 a.m. as her husband has to leave for office. After making breakfast, she drinks her coffee and makes her daughter a bottle. Later in the day, she takes her children to the playing centre and does the rest of her house chores that include washing, cleaning, and cooking, and putting her children back to bed at night, after a long tiring day, meanwhile proving none of the days are easier.

Rachelle’s post has started a new debate and most of the mothers can now relate to her situation. A mum of 3 commented on her post:

‘I work full time and feel guilty ALL THE TIME about not spending enough time with my three-year-old. But also because my head is not 100% at work either.’