In what have since been declared illegal captures, four Russian companies that supply marine mammals to aquariums caught almost 100 beluga whales and orcas over the course of several months in the summer of 2018. The animals have been in holding pens in Srednyaya Bay, in Russia’s far east, ever since. 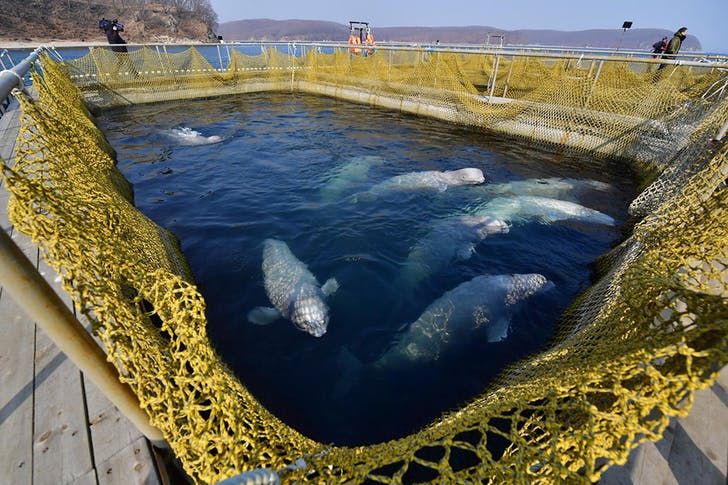 The orcas and belugas attracted international attention in late 2018 and early 2019 when a drone captured aerial video footage of the facility, which showed 98 orcas and belugas crowded in small sea pens. The footage led the media to label the facility a “whale jail.” The situation sparked outrage worldwide, both over the capture itself and the the cetaceans’ treatment.

Following international outrage, Russian President Vladimir Putin intervened and authorities launched an investigation into the capture of the whales. Russian officials also signed a joint agreement with U.S-based nonprofits Ocean Futures Society and The Whale Sanctuary Project in April announcing that all the captive belugas (Delphinapterus leucas) and orcas (Orcinus orca) would be released back into their natural environment.

Jean-Michel Cousteau, founder of the California-based nonprofit Ocean Futures Society and son of Jacques Cousteau, and Charles Vinick, executive director of the U.S.-based Whale Sanctuary Project, visited the whales. The whales were struggling, and many had skin lesions. The lesions could have been from a fungal bacterial infection, from frostbite, or from both. Ice was forming over the water in the pens, which workers had to regularly break up using shovels so that the whales could breathe. Even though the whales were in rough shape, it was determined they could be rehabilitated and released.

On Nov. 10, Russian authorities announced that the last of the 50 beluga whales had been released in Uspeniya Bay, in the Primorsky region, about 100 kilometers (62 miles) away from the holding facility.

The “Whale Jail” Is No More.

The last belugas were released in the Bay of Uspeniya Lazovsky. The notorious “whale jail” that held 10 orcas & 87 belugas captured for marine parks in China is empty.

The rescue is the largest in history & a remarkable achievement. @Whale_Sanctuary pic.twitter.com/rpgbmouVwA

Russia’s Research Institute for Fisheries and Oceanography (VNIRO) told TASS, a Russian news agency, that it has been monitoring the whales. Some of the belugas are still in Uspeniya Bay, it said, while others have moved away from the points of their release. Some have even migrated up to 40 kilometers (25 miles) away.

“Now, we can say that the animals were set free in good physical condition and are vigorously adapting to the wild, using the opportunities for food available in Uspeniya Bay and along the Primorsky Region coastline,” VNIRO told TASS.

Russia will also change the law that allowed the companies to capture the whales in the first place. Nearly 150,000 beluga whales and around 50,000 orcas live in the world’s oceans.