There are some truly beautiful people in this world, who naturally care for the animals around them. This boy is a nature guardian.

There are some routines that are considered normal before school: wake up, brush your teeth, get dressed, eat breakfast. The last one is extremely important.

Which is probably why this kind-hearted child went out of his way to make sure a blind deer had enough to eat every day, before he made it to school.

Inspired by the boy’s kindness, the boy’s neighbor, a Reddit user named bluecollarclassicist, snapped a photo of the duo to share on the Internet, then contacted a local rescue group to see if they could step in to give the deer proper care. 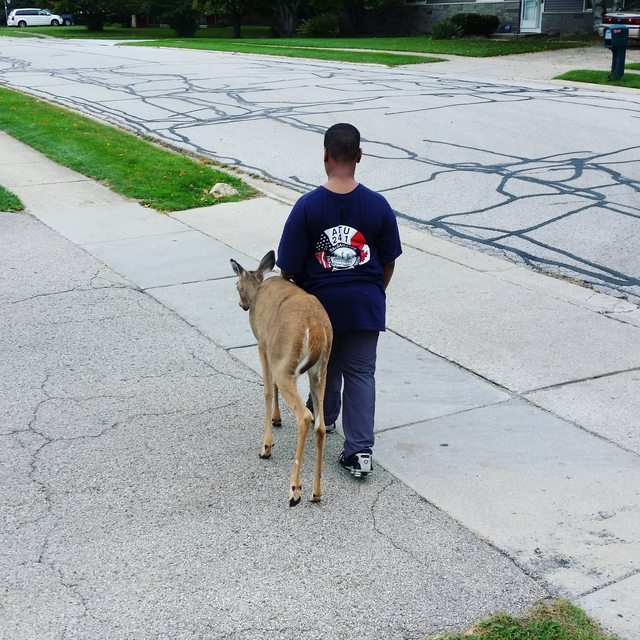 Apart from her blindness, deer like this one are also in danger from government wildlife officials, who will often put animals down without any attempt to save them.

“He showed a lot of love and respect and my wife and I are going to talk to his mom about a way she would want to see his act of kindness rewarded,” bluecollarclassicist wrote on Reddit, after the deer was safely picked up and brought to a wildlife preserve.

“The deer is getting picked up today by a local animal rescue group (NOT animal control) and taken to a vet for assessment,” he wrote. “It will likely be tagged and taken to a controlled forest preserve but they did say that since she seemed so docile that she might end up in an approved farm or petting zoo.”

It’s not the same as the wild, but hopefully it will be a much safer home for a helpless little deer like this one. And with any luck, she’ll have a chance at a long and happy life, thanks to one selfless little boy.

“When they took her away I spoke to some more people and it sounds like the rest of the neighborhood has been feeding her and guiding her away the road for almost a week now. The little boy was by far the sweetest example of helping and caring.”

Think back to when you were a kid, going to school. Would you have taken time out of your morning to help a blind deer?