Fathers are hardworking men who are concerned with the health and well-being of their children. But fathers also have a creative knack for finding new ways to cause embarrassment to their children. There is a reason the term ‘father joke’ is synonymous with the term ‘bad pun.’

One father in Orlando recently set out to teach his daughter a valuable lesson. He also provided the dad fraternity with a new weapon to poke fun at their children. 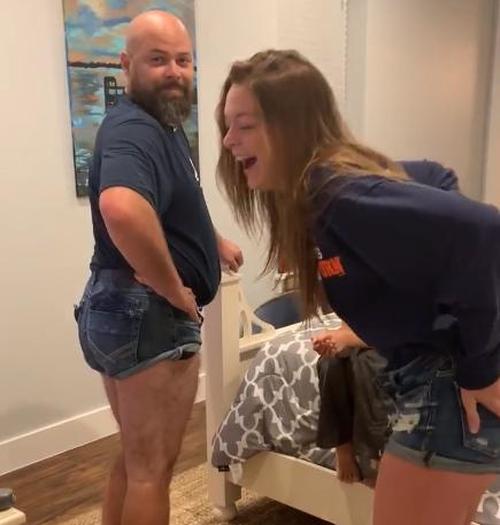 Jason Hilley reacted as most fathers would when he saw his daughter wearing a pair of jean shorts that were much too small for his liking. Jason says he told his daughter, Kendall, to take his debit card and purchase a pair of shorts for herself that actually fit.

Jason thought the problem was solved only to find out a few days later Kendall had yet to learn her lesson. He knew he had to do something more when he spotted her a trying to leave the home in contraband shorts. Jason says when he questioned Kendall about the shorts, she told him they were the shorts she purchased with his debit card.

Jason thought about restricting his daughter to the house for a few days as punishment. However, he thought of a response to her offensive behavior that would likely scare her and all her friends away from short shorts forever.

Jason donned a pair of cutoff shorts himself before entering his daughter’s room. The mortified look on her face was priceless. Jason’s wife, Allison, recorded the scene and could be heard laughing loudly from behind the camera.

‘You wear yours out in public? I will wear mine! Parenting 101!’ the video is captioned.

Jason told Kendall to retrieve her own shorts when he walked into the room wearing his. He challenged her to see which of them possessed better fitting shorts. Jason told his daughter that if the present lesson was not enough he would wear the shorts the next time he came to pick her up from school. Kendall laughed at the idea but did not want to call her father’s bluff. She told him she would not wear the prohibited shorts again.

‘You wear yours out in public? I will wear mine! Parenting 101!’ the video is captioned.

Jason posted the video of the moment on Father’s Day. The post was viewed more than 45 million times and many comments were left by amused parents.

What do you think of this fathers attempt at teaching his daughter a lesson? Let us know in the comments – and make sure you pass this along to your friends and family!