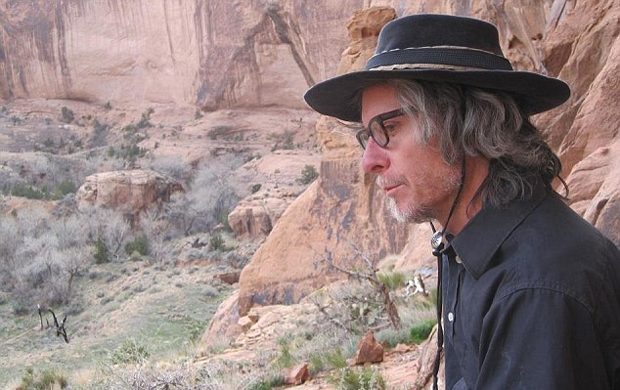 In 2000, Daniel Suelo gave away all his worldly possessions, left his last $30 in a phone booth and wandered into the wilderness of the American Southwest. This, he says, is when his life began.

The author of his biography

, Mark Sundeen, had known Suelo for 20 years before he walked away from money and civilization. At first, he thought Suelo had lost his mind.

“He said money was an illusion, and I didn’t really believe that,” Sundeen says in the video below. But when the economy collapsed in 2008 and “money just disappeared” Sundeen thought “maybe Suelo had a point.” In 2009, Sundeen began writing Suelo’s story:

Suelo has lived without a penny to his name for nearly 15 years. He refuses to use or accept money, government assistance or even barter and trade.

“My philosophy is to use only what is freely given or discarded and what is already present and already running, whether or not I existed,” Suelo writes on his blog “Zero Currency.”

“Our whole society is designed so that you have to have money,” he continues. “You have to be a part of the capitalist system. It’s illegal to live outside of it.”

As well as quitting cash, he threw away his passport and driver’s license and changed his legal name, Shellabarger, to Suelo, Spanish for soil, Britain’s Daily Mail reported in 2012.

Suelo has spent most of the last decade and a half camping in the desert, living in caves, staying in communes around the country and occasionally spending the night in the homes of strangers.

For several years, he lived in a cave on the edge of a cliff in Utah’s Arches National Park, where he carved a bed out of rock, foraged for food, drank from springs and bathed in a creek. When Suelo was away, he left a note for hikers – “Feel free to camp here. What’s mine is yours. Eat any of my food. Read my books. Take them with you if you’d like.”

His food there included foraged mulberries and wild onions, scavenged road-killed raccoons and squirrels, expired groceries from dumpsters and meals cooked by friends and strangers.

While critics complain that Suelo’s getting a “free ride” and that the system would collapse “if everyone lived like him,”  Sundeen points out the irony that “if everyone keeps living like the average American, the world will actually collapse much more quickly.”

Last summer Suelo decided to move back to “civilization” – Fruita, Colorado – to care for his aging parents. He still lives without money, but has had to reinstate his driver’s license to drive them around. He’s set up camp at a nearby river so as not to lose touch with “the real world,” where he still lives by his mantra of taking as little as possible and giving as much as he can.

“We can cultivate freely giving and freely receiving no matter what station of life we’re in. That’s our true nature. It exists in everybody.” Suelo says in the video above.

Read adapted excerpts from Sunsteen’s book in The Atlantic.

And check out these people who live with no money – The Hadza: The Freest People on Earth Are About to Go Extinct

Thanks to ReturnToNow for this post | Featured image source