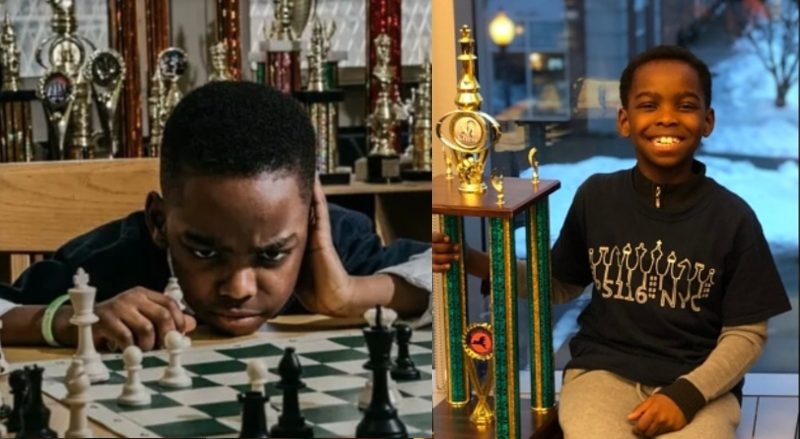 When you think of a chess champion, you generally picture a serious gentleman in a suit and tie, stroking his beard while he stares at the board, contemplating his next move.

New York’s newest champ defies all those categories — he’s an 8-year-old smiling Nigerian refugee who lives in a Manhattan homeless shelter with his family.

According to New York Times’ Nicholas Kristof, Tanitoluwa Adewumi, has won the chess champion for kindergarten through third grade at the New York State chess championship.

What’s even more extraordinary is that Tani, as he is known, learned chess only a bit more than a year ago. His play has skyrocketed month by month, and he now has seven trophies by his bed in the homeless shelter. “I want to be the youngest grandmaster,” the young lad said

Tani’s family fled northern Nigeria in 2017, fearing attacks by Boko Haram terrorists on Christians such as themselves.
His rating is now 1587 and rising fast by comparison, the world’s best player, Magnus Carlsen, stands at 2845.)

Coaches at the tournament were dazzled by Tani’s aggressive style and stunned to find out that he’s been playing chess for about a year, learning the game at public school.

Tani’s father works two jobs and his mother is hoping to find work as a home health aide so the family can move out of the homeless shelter into their own place.

Then Tani can have his own room to store his seven chess trophies, including one that is almost as big as he is.

His next goal is a national championship for elementary school students in May. He said his ultimate goal is to become the world’s youngest grandmaster.

“My opponents make good moves too. Sometimes I don’t take these things into consideration.” – Bobby Fischer

This one hits home for anyone who plays chess. It is easy to get too into your own ideas and not consider your opponent’s moves. Many games have been lost due to this oversight.