A couple moved their wedding forward by three months so their terminally ill dog could attend.

34-year-old Estelle Harris and now husband 32-year-old Danny Harris, from Derbyshire, were heartbroken when their beloved bull mastiff Bruce was given months to live.

Rushed to hospital at the start of December with white gums and a blue tongue, Estelle thought she was going to lose the beloved pup she has owned since he was eight weeks old.

Bruce was diagnosed with pleural effusion, with fluid surrounding his lungs and heart. Being told the situation was critical, vets drained the liquid immediately before sending Bruce for more scans. 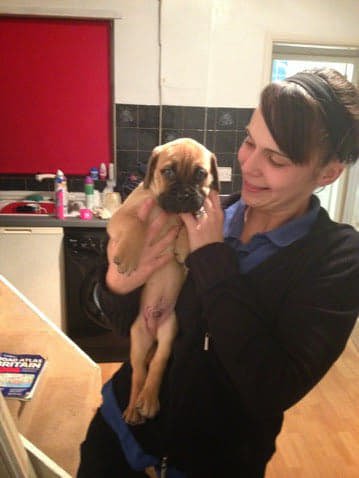 Later that month Estelle and Danny were given the news they were dreading – Bruce had cancer.

Estelle told UNILAD they were asked to say goodbye to Bruce in case he didn’t make it through the major operation to remove the lump. 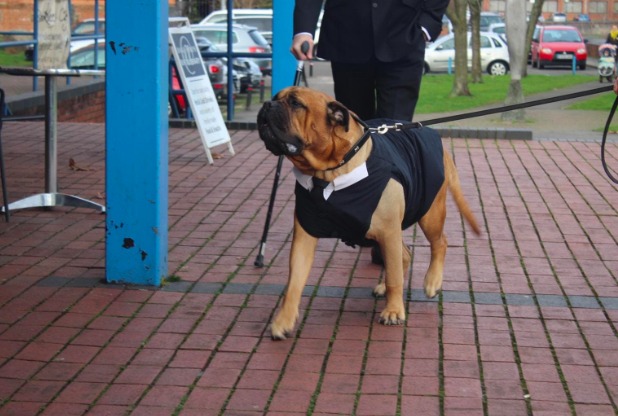 Bruce survived, but vets gave him up to four months to live, breaking Estelle’s heart:

“I was told to say bye to him over the weekend as he may not make it through the major operation. Monday came and he made it through the seven hour operation and had to have some ribs removed due to the cancer mass which was the size of a grapefruit.

We brought him home on Thursday as he had to stay in for the draining of the area with tubes in him. We got the results around a week and half later. I remember it well. I fell to the floor as it was hemangiosarcoma, the worst cancer he could possibly have.

This cancer is aggressive and fast and even with chemo he would only have six months the vet said. My whole world is falling apart knowing that he’s dying and there’s nothing I can do about it.”

Although Estelle is trying everything she can to prolong Bruce’s life, including research cancer fighting foods, she had to face the harsh reality it was unlikely he would be around for her wedding.

Estelle and Danny, who have been together for four years, had arranged to get married on May 4, but the couple decided they had to move the date, so hastily rearranged for February with only three weeks’ notice.

Getting married at Burton’s registry office, they sacrificed their original deposit, caterers and several guests who couldn’t attend the new date.

Estelle said it was all worth it though, telling UNILAD it was ‘either change the date or not get married at all’. 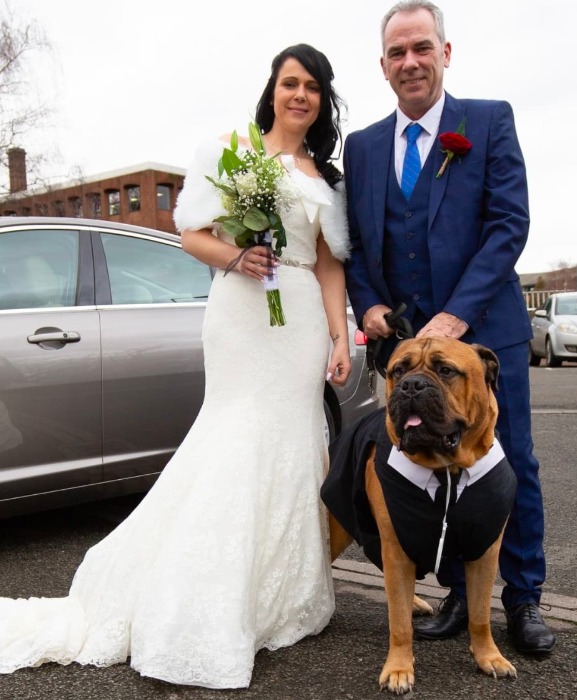 That’s because Bruce is like a child to Estelle, who added:

“Bruce is so funny and very much a mummy’s boy. Danny has two children, I have none. Bruce is my child, a four-legged one but still love him as much as a human child. He’s my world and nothing will ever come close to me and Bruce.

It was important to have him in my photos. Our families totally understood as they are all dog lovers and know how much Bruce means to us.

I do everything with Bruce, my whole life revolves around. I feel I have nothing to live for once he’s gone. Obviously I have a husband, two beautiful step-children…but Bruce is so important to me… he’s my life.”

Estelle’s mum even made Bruce his very own waistcoat at the last minute to ensure he matched with Danny.

Looking suave, Bruce looked very handsome on the big day, although Estelle added Danny is a bit frustrated the pup’s chest is bigger than his. 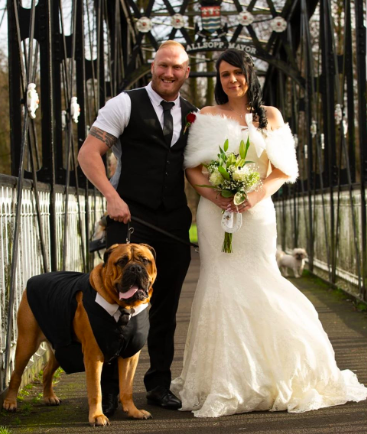 Bruce is currently two months into the four vets gave him, but Estelle described him as doing ‘really well’.

Each year the couple take him away on holiday to Cornwall, and hope it will be possible this year.

We hope so too, and congratulations on the wedding!

Estelle’s sister-in-law Keyleigh H Roome has set up a GoFundMe page which is raising money for vitamins, oils and tablets would could prolong Bruce’s life. You can donate here.