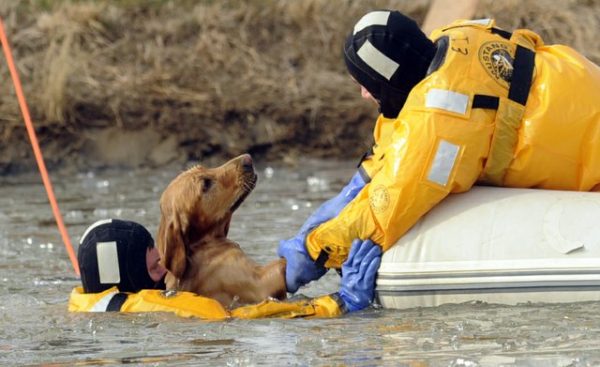 Real-life stories can have happy endings, too. They remind us that each of us can save someone’s life and become a hero, especially when it comes to animals.

Today, Bright Side found 12 photos of animals in peril that were fortunate enough to have dedicated and brave humans around to rescue them.

A Slovenian Civil Protection rescue worker saves a dog during heavy floods in the village of Prud.

A boy carrying his dog through Filipino flood waters.

This dog lost his home but found a friend.

This man saved an orphaned baby dolphin with its umbilical cord still attached.

Bill Janz reunites with his dog Abby after it was found safe in the High Park Fire in Fort Collins, Colorado.

This little boy helps a puppy cross the river.

A rescue worker carries a cat found near the site of a mudslide at the village of La Pintada, in the Mexican state of Guerrero.

Two Norwegian guys rescue a sheep from the ocean.

A woman helps her pig along a flooded street, Vietnam.

This policeman makes sure that this duck and her ducklings get home safe.

We all need a little break sometimes.

Thanks to Brightside.me for this post | featured image source