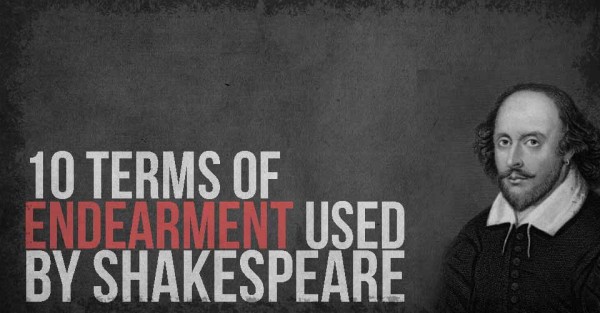 Terms of endearment are words we use to lovingly describe someone, or their behaviours. A lot of the same ones get thrown around and used repeatedly till they sometimes lose their meaning. If you’re looking for some new words to use to show affection, perhaps you should take a look to the past- to the words of William Shakespeare.

Although not much is known about the brilliant writer’s personal life, we do know that he had a way with words. In fact, he often created new words and used them in his unique style of writing. One biography even says this, “The English language owes a great debt to Shakespeare. He invented over 1700 of our common words by changing nouns into verbs, changing verbs into adjectives, connecting words never before used together, adding prefixes and suffixes, and devising words wholly original.”

With such a gift for language, surely he must have come up with something other than “sweetie” or “cute.”

Indeed he did. Here are 10 Shakespearean words to show affection. Try them out and see how you like the fit.

When you want to say “lamb” but even “lamb-ier.” Lambkin is lovingly used to refer to someone who is remarkably sweet, innocent and light-hearted. It is pretty much the ultimate cutesy pet name.

It doesn’t really sound that lovely, does it? It actually means “my love” or “loves” and was used as a term of endearment for husbands, as well as wives and children. In Love’s Labour Lost, Shakespeare writes: “Sweet chucks / beat not the bones of the buried.”

This is one term which Shakespeare was rather fond of using. Meaning “a fine fellow,” it comes directly from the French beau coc. Literally translated, it means “a handsome rooster.”
Read: 50 Everyday Phrases That Come Straight from Shakespeare

This term of endearment means “dear” or “darling.” Sometimes this is used with the added diminutive suffix of “y” to form “ducky.” Shakespeare uses this in A Midsummer Night’s Dream, “O dainty duck, o deare!”

In Romeo & Juliet, the nurse who is trying to find Juliet calls out, “What lamb, what ladie bird… Where’s this girle!” This is the first recorded use of ladybird in English. This term of endearment shows affection for a close female friend, or sweetheart.

Okay, maybe using this one could be confusing. Before the word took on a negative tone, bullies were something to run towards, instead of away from. In the mid-1500s, the term bully meant someone was a good friend, or a sweetheart. Shakespeare used it in several of his plays, including Henry V, A Midsummer Night’s Dream, The Merry Wives of Windsorand The Tempest. Only in the 1600s did the word change to a less friendly meaning.
Read: “I Have a Dream”: 25 of the Greatest Quotes from Martin Luther King Jr.

Though this word is pretty much obsolete in current times, back in Shakespeare’s day it was used frequently. Mostly by mothers who were lovingly referring to the way their children would get into humourous mischief. Do you have a kid who seems to find funny ways of getting into trouble? Aww, what a sweet wag.

Believe it or not, this has been a term of endearment long before the 1980s. Shakespeare adopted this word from the Middle English budde. Originally meaning the literal bud of a plant, Shakespeare turned this into “an immature or underdeveloped person.” How is that a term of endearment? Not everything was seen as offensive back then.

The first use of the word in English came around 900, but wasn’t used as a sign of affection until Shakespeare’s time. This use of the word has stuck around for a long time, and will probably be here for a while.
Read: The Power of Myth: 25 Quotes from Joseph Campbell

Though this word has been around in English since the days of Old English, it didn’t become a term of endearment until the 16th century- with Shakespeare’s writing. Usually said in reference to women, it means “demure, quiet, darling.”