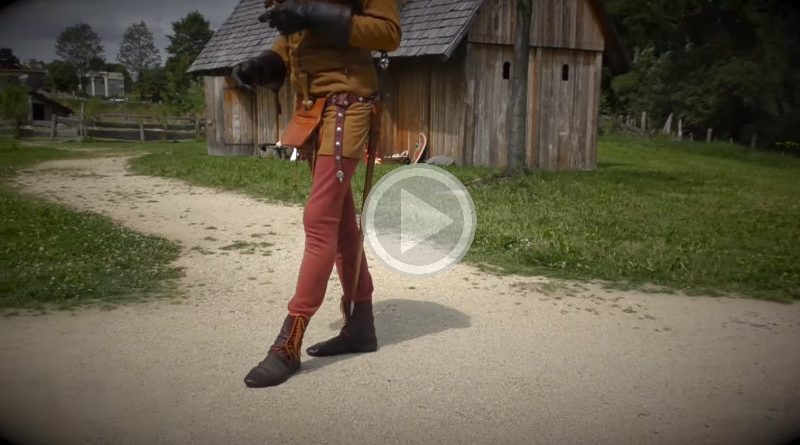 A whole lot about medieval life would feel foreign to us now. No indoor plumbing, no toilet paper, no comforters, and a whole lot of blood letting. But you might not expect that you’d have to walk differently, too.

As this video spotted by Boing Boing points out, life in medieval Europe did not include well-soled shoes. If you had shoes, they were likely glorified leather socks. And to protect their tender feet from harm, people had to tread more carefully, unlike those of us whose cushy rubber soles allow us to stomp around modern cities.

Recorded in Germany’s History Park Bärnau, an open-air museum that explores life between the 9th and 13th centuries, this video by Roland Warzecha illustrates the mechanics of movement in Western Europe prior to 1500. (Warzecha runs a martial arts school devoted to historical European swordsmanship in Hamburg.)

The medieval step was much more toe-focused. Instead of hitting the ground with the heel, medieval European strollers stuck out their feet like ballerinas, touching the ball of the foot down on the ground first before putting their full weight down. This lighter step takes more muscle effort—Warzecha says he’s developed killer calf muscles after doing it for six months—but allows you to feel any potential obstacles before you put your whole body weight on top of them, lessening the chances that you’ll injure yourself on a rock or a piece of wood or even a hidden snake.

If you touch your toe to the ground first, you can always lift your leg back up and avoid stepping down harder on that sharp rock/snake, but if you hit the ground with your heel first, it’s harder to jump back.

Around 1500, people began to wear more structured shoes, allowing them to walk with slightly less trepidation on uneven or litter-filled ground. And because people are, no matter what the time period, lazy, we began favoring the heel-first walking method.

In the modern era, people who don’t wear shoes still tend to walk this way. A small subsection of runners use this so-called “forefoot running” as well, which tends to cut down on knee injuries (but isn’t without its negative effects, either). They probably have awesome calves, though.