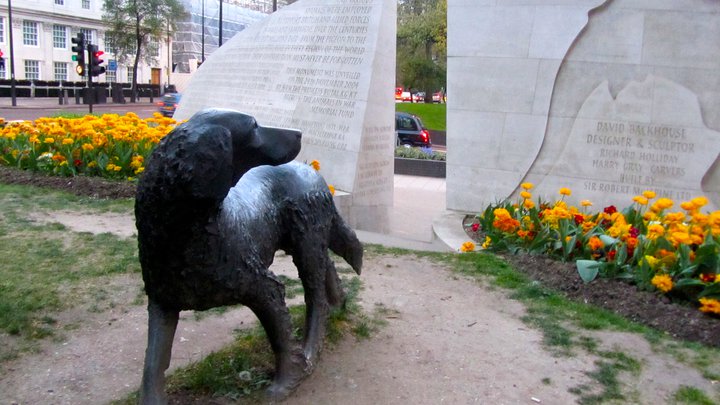 Britons are a well-known nation of pet-lovers, but this ‘love story’ has a forgotten issue of betrayal in the past, during the WWII.

Concerned about the food shortages during the run-up to WWII, the British government formed the National Air Raid Precautions Committee (NARPAC) to decide what to do with pets before the war breaks out. The committee was concerned that pet owners might worsen the situation if they feed their animals.

So in order to abbreviate this potential problem they sent out a pamphlet titled “Advice for Animal Owners”. The pamphlet which came with an advertisement for a specific type of gun said: “If at all possible, send or take your household animals into the country in advance of an emergency.”

It concluded: “If you cannot place them in the care of neighbors, it really is kindest to have them destroyed.” And so it was – BBC announced the advice and almost every newspaper printed it.

Surprisingly there were thousands of Britons who immediately answered this call and ‘got rid of their pets’ in order to save both themselves and their pets from a possible starvation. Within a week, 750,000 pets were ‘destroyed’.

When the war was declared in 1939, the pet surgery clinics and the animal homes were full of pet owners waiting in rows to euthanize their pets. Some pet owners saw a chance of saving their pets by admitting them to join war efforts.

And it doesn’t end there. The government took an action where secret service MI5 agents were in fact sent out to watch over animal activists. “As I discovered, Britain set out in 1942 to recruit an army of 6,000 dogs. They were pets loaned by their families for the duration. Many did not make it home. At the same time, officials were secretly plotting the mass destruction of dogs and launched a hate campaign against cats.

The wartime Archbishop of Canterbury would not allow the saying of prayers for animals because it was ‘theologically inaccurate’. It’s amazing that pets made it at all.” (Campbell, 2013) – writes Clare Campbell in her book “Bonzo’s War – Animals under Fire 1939 – 1945” dedicated to the suffering of British animals during the WWII.

Even though there were many individuals, animal charities and veterinarian groups such as PDSA and the RSPCA that opposed this ‘hearty massacre’, their clinics were overwhelmed by owners bringing their pets for destruction.
And not only pets were the ones who paid for the food shortage, but also animals of all shapes and sizes in the UK were killed.

Every animal in London’s Zoo was killed – from the Black Widow spiders through to lion cubs all lined up for extermination.

What is even stranger for a pet-loving nation is that these killings took place during the summer of 1939, which means that Germany was still a few months away from invading Poland, and during a time when the British government could think of various political solutions of how to deal with the upcoming war instead of massacring the animals, spreading anti-animal campaigns and printing posters for when the Nazis conquered London.

So, when a year later – in September 1940 London was bombed even more pet owners rushed to euthanize their pets. While there was a mass hysteria among people, there were many who tried to restore calm. “Putting your pets to sleep is a very tragic decision. Do not take it before it is absolutely necessary,” urged Susan Day in the Daily Mirror.

But the government pamphlet had planted a powerful seed.

“People were worried about the threat of bombing and food shortages, and felt it inappropriate to have the ‘luxury’ of a pet during wartime,” explains Pip Dodd, senior curator at the National Army Museum.

“It was one of the things people had to do – evacuate the children, put up the blackout curtains, kill the cat”, says Hilda Kean. “Our technical officers called upon to perform this unhappy duty will never forget the tragedy of those days.” says Maria Dickin, the founder of PDSA.

It was “a national tragedy in the making”, says Clare Campbell

However, greatly against the trend, Battersea Dogs, and Cats Home, managed to feed and shelter 145, 000 dogs during the war. Another famous advocate against the pet killing was the Duchess of Hamilton, a cat-lover, who created her own sanctuary. “Battersea actually advised against taking such drastic measures and our then manager Edward Healey-Tutt wrote to people asking them not to be too hasty”, spokesman says.

In Memoriam notices started to appear in the press. “Happy memories of Iola, sweet faithful friend, given sleep September the 4th, 1939, to be saved suffering during the war. A short but happy life – 2 years, 12 weeks. Forgive us little pal,” said one in Tail-Wagger Magazine.

Today, there is a memorial in London’s Hyde Park to honor the pets that died in WWII. The memorial has two inscriptions. The first one reads: “This monument is dedicated to all the animals that served and died alongside British and allied forces in wars and campaigns throughout time.” And the second one says: “They had no choice.”