By Sarah Laskow for Atlas Obscura

Off the coast of Sicily, near the city of Gela, a new expedition to a 2,600-year-old shipwreck has returned with 47 lumps of orichalcum, a rare alloy said to be smelted* on the fabled island of Atlantis, Seeker reports.

The shipwreck dates back to 600 B.C. and was previously explored in 2015, when underwater archaeologists found 39 ingots of the metal. This trip also yielded a jar and two Corinthian helmets.

Orichalcum was supposed to be a shiny alloy, much like brass. It’s known from ancient texts, like Plato, which described it as a rare metal, mined at Atlantis. Plato described a temple to Poseidon that had an entire pillar of orichalcum, Seeker says. LucasArts fans of a certain age may remember it as a feature of the computer gameIndiana Jones and the Fate of Atlantis. 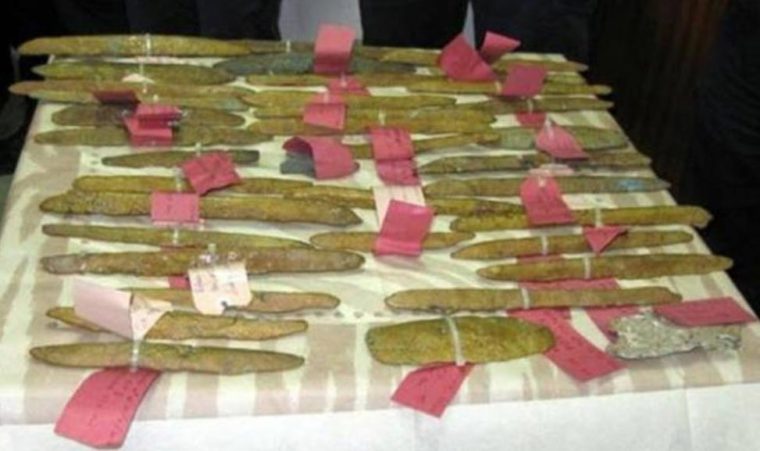 In 2015, after this shipwreck was discovered, Sicilian officials started describing the metal found there by the same name. The ingots were made from zinc, charcoal and copper, News Corp Australia reported at the time; tradition had it that orichalcum was made of copper, gold and silver. The metal found by the shipwreck, though, matched ancient descriptions of orichalcum, which was supposed to have a red tone to it.

Whether or not the metal found in this particular shipwreck is the orichalcum of old, it is a strange and rare discovery—possibly sent to the sea as an offering to the gods.