The stones are over 400 years old, and are inscribed with a sinister warning, “If you see me, weep.”

As Europe wilts in the sweltering, record-breaking harshness of summer 2018, strange things are happening.

Mysterious outlines of ancient societies have revealed themselves across the seared landscape, but it’s not just traces of ghostly architecture resurfacing. So too are grim words of warning.

These hunger stones traditionally sit below the water line of the Elbe River as it flows through the town of Děčín in the country’s north, but with water levels hitting record lows in Europe, the rocks and the words carved into them have been exposed once more. 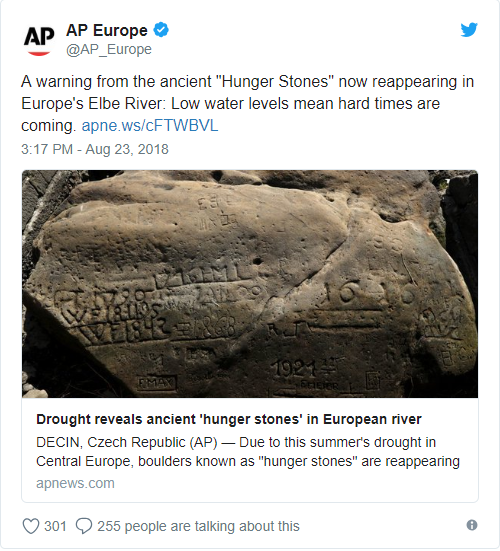 In the current conditions, more than a dozen of the hunger stones can now be seen around Děčín, recording the low water levels of years and centuries long ago – “chiselled with the years of hardship and the initials of authors lost to history,” as described by the authors of a 2013 study on historic Czech droughts.

The oldest and most famous of these landmarks, known simply as “Hunger Rock” according to Děčín’s tourist guide, contains an inscription that dates back to 1616, which reads: “Wenn du mich siehst, dann weine” (If you see me, weep).

While the oldest legible inscription on this particular Děčín hunger stone is from 1616, the rock commemorates numerous droughts going as far back as 1417.

A fellow hunger stone in Germany records the conditions that year in no happier terms: “If you will again see this stone, so you will weep, so shallow the water was in the year 1417.”

Others say things like “We cried – We cry – And you will cry”, and “Who once saw me, he cried. Whoever sees me now will cry”.

The reasons for such ominous bouts of weeping could be numerous.

When drought and heat came, it could signal not only a bad harvest, but a lack of food and higher prices. And as the water level sank, river transportation became harder, threatening the livelihood of families living along the shore.

With the Elbe now at its lowest level in more than half a century, the drought is also surfacing reminders of a different kind of misery: unexploded World War II bombs and hand grenades that have been corroding in this waterway for over 70 years.

While scientists are still coming to terms with what the Northern Hemisphere’s sweltering summer portends for the future, a more recent Czech inscription on the Hunger Rock at least tries to lighten the mood a little.

Sound advice. If your pail has any water, that is.