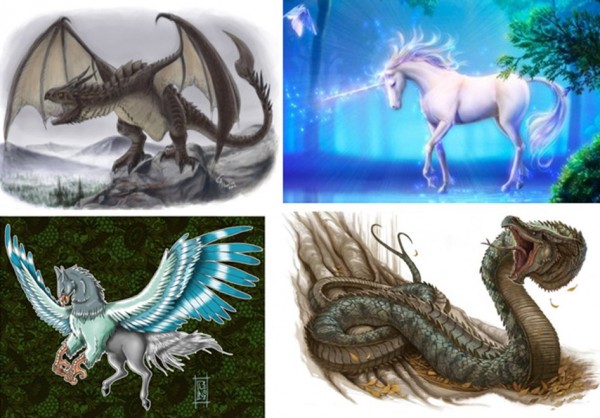 The basilisk can look like a giant venomous snake or like a being with the body of a snake, and the head, wings, and legs of a rooster. This terrifying beast is known for killing its victims with its gaze.

In his “Naturalis Historia”, Pliny the Elder describes the basilisk as a small deadly snake living in Northern Africa. The snake is said to be “no more than twelve fingers in length”. The term “basilisk” comes from the Greek “basilikos” meaning “little king”. This refers to the crown the basilisk has on its head.

This being moves around with its body in a straight upward position. Legends say it can break stones by breathing on them and set bushes on fire. The basilisk’s breath turns the creature’s surrounding environment into a desert. Pliny said that if a person uses a spear to kill a basilisk, then the creature’s venom can climb up the spear and kill the individual.

The basilisk cannot stand the rooster’s song nor can it tolerate the smell of a weasel. To kill a basilisk, one can lure and trap it inside a weasel’s den or throw a weasel into the basilisk’s own den. Also, the crow of the rooster causes the instant death of the basilisk. Another way to kill a basilisk is by making it stare at its own reflection in a mirror. 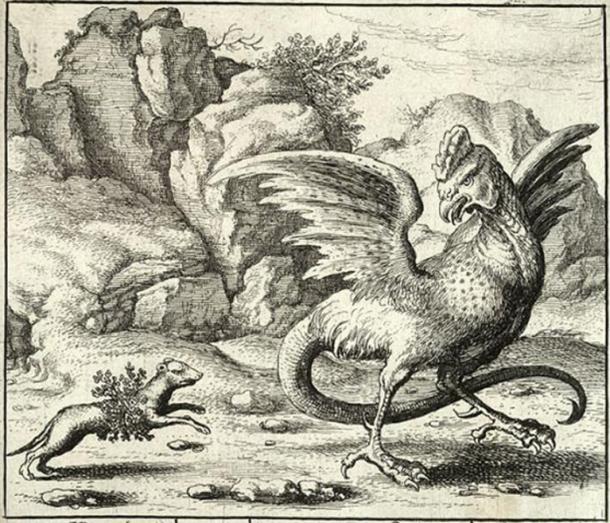 The basilisk and the weasel, in a print attributed to Wenceslas Hollar. (Public Domain)

It is believed that there are many different types of unicorns depending on their appearance. Ctesias described a type of Indian unicorn resembling a donkey with a dark red head, blue eyes, white body and a 30 centimeter (11.8 inch) long horn. The horn was said to be white at the base, black in the middle, and red at the top. Cups made of unicorn horns were believed to protect against poisoning, epilepsy, and seizures. However, the unicorn’s strength and temper make it very hard to capture.

In comparison to Ctesias’ description, Pliny defined the unicorn as having a deer’s head, a wild boar’s tail, a one-meter-long (3.3 ft) black horn and elephant feet. He also added the fact that the creature had a low and resonating voice. The equalacorn is very rare. This creature was believed to have a fierce temper just like the unicorn and was said to be very hard to capture.

Almost all agree that the unicorn’s horn is believed to be magical. A medieval tale speaks of how a unicorn placed the tip of his horn into the water of a pond making it clear and pure for animals to drink. Should a unicorn meet an innocent maiden, it would supposedly put its head in her lap and fall asleep. This is also how it was believed that a unicorn could be lured and captured. 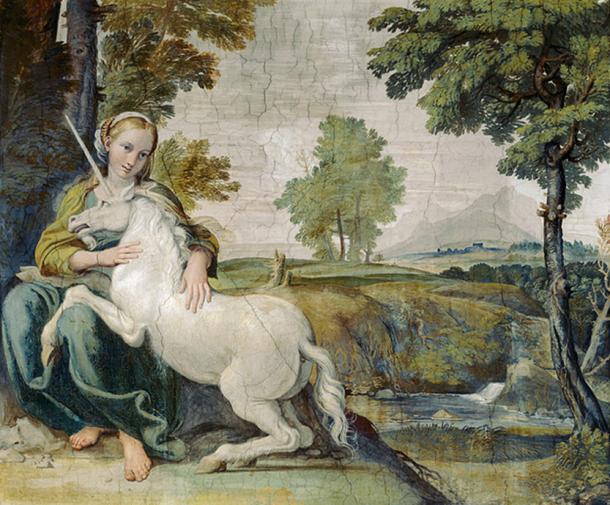 A Virgin with a Unicorn. (1602) Fresco by Domenichino.  (Public Domain)

Thanks to Ancient Origins for this post | Featured image source